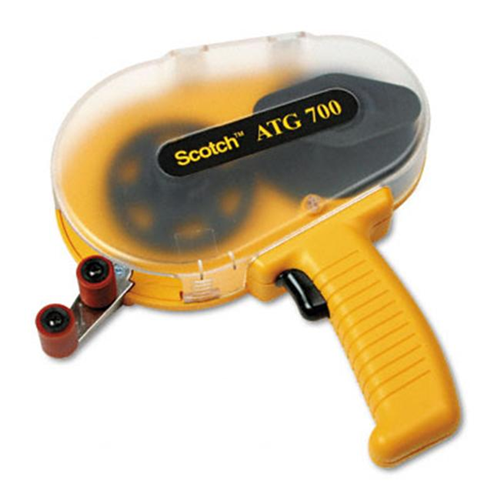 3M is fundamentally a science-based company. We produce thousands of imaginative products and were a leader in scores of markets - from health care and highway safety to office products and abrasives and adhesives. Our success begins with our ability to apply our technologies - often in combination - to an endless array of real-world customer needs. Of course all of this is made possible by the people of 3M and their singular commitment to make life easier and better for people around the world.Scotch Adhesive Applicator ATG700 is a yellow adhesive applicator for use with Scotch) ATG Tape 1/2" or 3/4" wide rolls. Covered gears minimizes applicator jams. Transparent cover shows remaining tape. Holds up to 60 yd (55m) of Scotch) ATG Tapes. Holding Capacity: 1 Tape (Total). Holding Size: 1 Tape(s) of 0.75" W. Filling: Refillable. Size: 8.25" H x 9.75" W x 11.09" D. Recycled: No. Assembly Required: No. Country of Origin: US. Type: Handheld Tape Dispenser.

3.0
Average rating based on 5 reviews

Of the 4 reviewers who responded, 1 would recommend this product.