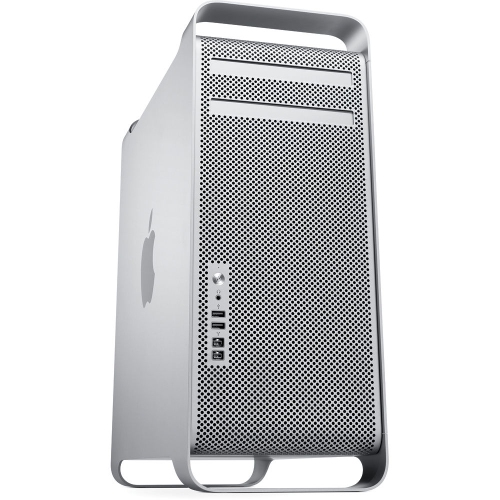 With 12 cores of total processing power, the Mac Pro Intel Xeon 12-Core Desktop has been designed to be the fastest Mac ever--and it does not disappoint. Utilizing the latest technologies, and the finest eco-friendly materials, this generation of Apple's Mac Pro series continues the legacy of power, speed, and expansion it has come to be known for.

In addition to the raw power of the 12 cores, the boost performance can get up to 1.5x that of the normal processing speed. With high-performance ATI Radeon HD graphics, and ultra fast solid-state drive options your potential speed and performance is further enhanced--with up to 5x faster video performance, and 2.5x faster encoding. Expansion is fast and simple as well with the easy-access provided by the well-designed interior of the Mac Pro. It is literally a "snap" to add up to 64 GB of memory, four PCI Express expansion cards, and up to 8.0 TB of HDD or SSD storage.

With these impressive features, and many more, your Mac Pro Intel Xeon 12-Core Desktop will easily tackle nearly anything you throw at it--while also functioning very efficiently. Compliant with Energy Star 5.0 ratings, and thoughtfully designed with a highly recyclable aluminum enclosure, as well as being BFR- and PVC-free, it will have a large impact on your workflow, but not so much on the environment.

More Cores, In One Die

The Mac Pro Intel Xeon 12-Core Desktop is available in this 12-core configuration at 2.4GHz, and while many other multicore processors are composed of two separate dies, meaning some cached data travels outside of the processor itself in order to get from core to core. Because that's an inefficient way to access information the Mac Pro Intel Xeon 12-Core Desktop's single-die, 64-bit architecture makes its fully shared L3 cache readily available to each of the cores. This results in faster access to cached data and greater application performance. Combine that with the other technological advances and you get a Mac Pro that's up to 1.5x faster than the previous generation

Traditionally, system memory was often connected to a processor via separate I/O controllers. However Intel's Xeon processors feature an integrated memory controller, thereby connecting memory directly to the processor. The Mac Pro processors then have faster access to data stored in memory, and memory latency is reduced

Power When You Need It, Stability When You Don't

Turbo Boost automatically boosts the processor clock speed based on workload, and if you're using an application that doesn't need every core, Turbo Boost then increases the speed of the active ones on top of that

The Intel Xeon processors support Hyper-Threading, which allows two threads to run simultaneously on each core. So, for example, a 12-core Mac Pro presents 24 virtual cores that are recognized by OS X. Performance is enhanced because Hyper-Threading enables the processor to take better advantage of the execution resources available in each core

QuickPath Interconnect--a bidirectional, point-to-point connection--gives the Intel Xeon processors quick access to the disk, I/O, and other Mac Pro subsystems. There's a QuickPath Interconnect between the two processors in dual-processor Mac Pro models, as well. This connection acts as a direct pipeline, so processor-to-processor data doesn't need to travel to the I/O hub first--just another way the Mac Pro boosts performance across the board

All refunds will be processed within 4 Business Days