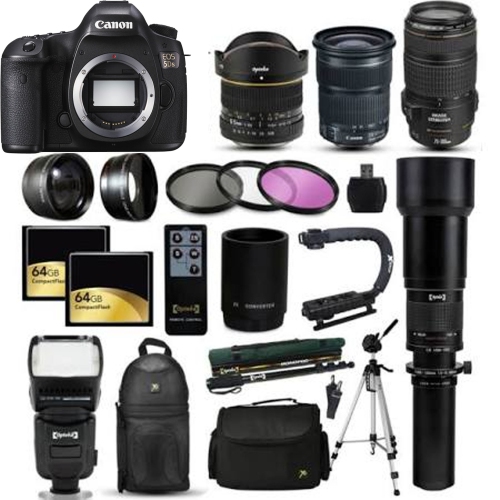 The EOS 5DS DSLR Camera (Body Only) from Canon is the long-awaited follow-up to the vaunted 5D Mark III and brings with it new technology and a number of significant upgrades, placing it in very lofty territory for a DSLR. Featuring a full-frame 50.6MP CMOS sensor, the camera captures ultra-high resolution images suitable for large-scale printing and extensive, creative cropping. The Dual DIGIC 6 Image Processors provide the wherewithal to handle this abundance of information, enabling fast performance speeds and top-of-the-line image quality. The 5DS also features advanced video capability including HD 1080p capture at 30 fps and a Time Lapse movie function which takes still photos at set intervals and combines them into a full HD movie.The EOS Scene Detection System with the 150,000-pixel RGB+IR metering sensor provides precise exposure and color metering and the 61-point High Density Reticular AF sensor with 41 cross-type points enables accurate AF placement and Canons EOS iTR (Intelligent Tracking and Resolution) enhances AF performance by using information from the metering sensor. Crop shooting at 1.3x and 1.6x allows for flexibility in the size of image files created and the selection of lenses. Also, a built-in intervalometer and bulb timer expand your creative options. An advanced mirror control mechanism and new selectable shutter release lag times control camera vibration for reduced blur and quiet operation. Anti-flicker functionality compensates for flickering light sources, providing consistent exposure metering during continuous shooting. Despite its large file sizes, the 5DS can still offer up to a 5 fps continuous shooting rate.For stable eye-level composition the 5DS features the Intelligent Viewfinder II with 100% coverage.  In addition to its clear view, a superimposed, transparent LCD is incorporated which displays setting information and offers a customizable view of focus points and grid lines. The 3.2 ClearView II LCD monitor provides playback and live view composition with 1,040k-dot resolution and a 170º viewing angle. High-transparency materials and multi-coating resist reflections for bright viewing, especially important when shooting video.The 5DS is a durable and multi-faceted camera for advanced use, yet its dimensions match that of the 5D Mark III. A magnesium-alloy build provides resistance to impact and the elements and inputs include a PC terminal, 3-pin input, an external microphone jack as well as HDMI out and USB 3.0 compatibility. The base plate and tripod socket have also been reinforced to reduce vibrations and ensure a secure attachment to support systems. Dual media slots for Compact Flash and SD format memory cards are supported. A customizable Quick Control System allows you to easily switch between frequently used settings and functions. New 50.6 Megapixel Full-frame CMOS Sensor

For fast, precise AF with sophisticated tracking performance, the EOS 5DS camera has an advanced, 61-point High Density Reticular AF system with up to 41 cross-type AF points. The AF system is sensitive to changes in composition, making adjustments quickly to help ensure consistent, sharp AF. A new RGB+IR AF sensor (with approximately 150,000 pixels) monitors subject motion, and Canons iTR Intelligent Tracking and Recognition system synchronizes the active AF point with the subjects motion, helping to ensure that AF precision is maintained. With focus modes dedicated to the particulars of the shooting environment, the EOS 5DS R realizes a level of focus accuracy befitting its 50.6MP sensor.

The camera shake that occurs from the impact of an SLRs mirror can leave blurred details in the recorded image. This effect is magnified when working with a high-resolution sensor like the one found in the EOS 5DS camera. To counter the effects of conventional, spring-driven SLR mirrors, the EOS 5DS features a newly developed Mirror Vibration Control system. The cameras mirror is not controlled by springs but instead is driven by a small motor and cams. This system suppresses the impact typical of the cameras mirror, significantly reducing impact and its effects on the image. A new Time Release Lag setting, easily accessed on the menu system, offers added protection against camera shake by setting the shutter release time intentionally longer so the camera does not begin the exposure until after the impact of the cameras mirror has diffused.

With Canons anti-flicker function, the camera is able to deliver accurate results under cycling lighting situations. Under flickering light, such as fluorescent lighting, a fast shutter speed may result in an irregular exposure. The anti-flicker function detects the frequency and phase of the flicker and captures images near the point of peak brightness when the subject is most likely well illuminated.

For still photography, the EOS 5DS camera features the flexibility of a cropping feature that extends the shooting effect 1.3x and 1.6x. With 50.6MP capture, cropped shots are possible with resolution to spare. Images recorded at 1.3x (APS-H) are approximately 30.5MP (6768 x 4512) Large/Fine JPEG, while images recorded at 1.6x (APS-C) are approximately 19.6MP (5424 x 3616) Large/Fine JPEG. Particularly useful in extending the range of telephoto lenses, the crop function also improves the subject tracking capability with almost the entire frame covered with AF points. Image cropping can be displayed in the viewfinder either masked or overlaid with an outline showing the cropped area, and in Live View shooting the image is cropped by the effect chosen. Aspect ratios can also be defined, with the EOS 5DS R shooting in 1:1, 4:3, and 16:9 ratios, in addition to the default 3:2.

The Canon 5DS R supports full HD 1080/30p movie capability and Time Lapse Movie function, which takes still photographs at set intervals and combines them into a full HD movie file, is provided. In addition HD and VGA resolution, numerous frame rates and ALL-I and IPB compressions are supported. Still images can be captured during video recording. A jack for an external microphone is provided.

The EOS 5DS offers time-lapse fixed-point shooting and long exposures without the need for a remote control. The interval timer takes from 1 to 99 shots at pre-selected intervals (from 1 second to 99 hours 59 minutes 59 seconds, or unlimited), ideal for shooting flowers as they bloom or clouds drifting through the sky. Captured