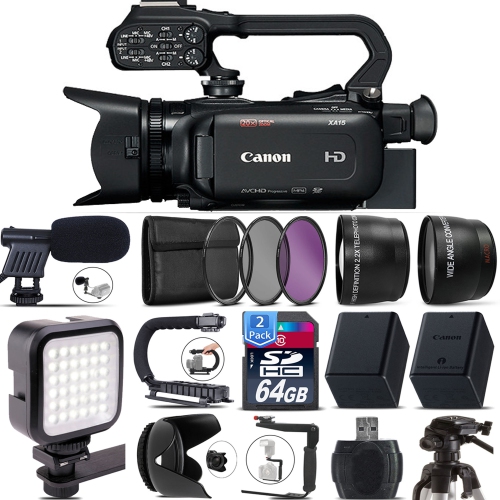 The Canon XA15 Full HD Camcorder is a compact run-and-gun camera that is suitable for ENG, event coverage, and independent and documentary filmmaking. It incorporates SDI, HDMI, and composite outputs. The camera features a 1/2.84, 1920 x 1080 CMOS sensor that captures video at various frame rates up to 59.94p, including a 24p mode for a more cinematic feel. The integrated Canon 20x HD optical zoom lens has a 35mm equivalent zoom range of 26.8 to 576mm, and features an 8-bladed iris to render highlights in a more natural manner.The final piece in the image chain is Canons Digic DV 4 image processor. This high-speed image-processing engine powers Canons Dynamic IS (Image Stabilization) mode reducing image distortion over traditional up-down, left-right image stabilization by adding correction for camera roll in three axes. The power of the Digic DV 4 allows the camera to simultaneously encode your video to two different codecs and bit rates, allowing you to have web-ready versions of your master footage available as soon as you stop recording.The XA15 features both a 3.5 OLED touch panel view screen with a 10,000:1 contrast ratio, and a color electronic viewfinder with 1,560,000 dots of resolution. The camera features full manual control and auto modes for exposure, focus, white balance, gain, and shutter speed. The camera provides professional features such as a pre-record buffer, peaking, zebra bars, color bars, and reference tone. The zoom speed is adjustable with variable, constant (with 16 different speed levels), fast, normal, and slow settings. The camera features a detachable top handle with zoom toggle, record start/stop, IR emitter, tally light, accessory shoe, external mic holder, two XLR connectors with phantom power, and manual audio level controls.Two built-in SD/SDHC/SDXC memory card slots allow you to record video to available media cards in both slots at the same time. This allows you to create an instant backup copy for archiving and data protection. You can also capture high-resolution AVCHD or MP4 video files on one card while creating a lower data rate MP4 more suitable for the web on the other card. When using two media cards and the camera is in Relay mode, there is no need to stop shooting to swap out a full media card; when one card becomes full, recording seamlessly switches to the other card. Built-in dual-band Wi-Fi allows you to FTP video files directly from the camera, or play back footage from the memory cards to Wi-Fi enabled TVs and computers. You can also remotely control camera functions from a smartphone or tablet over Wi-Fi, freeing you from remote cables.Canon Native 1920 x 1080 CMOS Sensor

The XA15 features a 1/2.84-inch HD CMOS Pro Sensor with 2.91MP. The large size of the individual pixels enable a minimum subject illumination of 1.0 lux for shooting in low-light conditions.

The Canon 20x HD zoom lens provides a zoom range with a 35mm equivalent of 26.8 to 576mm, and features an improved circular iris design providing a more natural look with out-of-focus areas that are smoother and more appealing. Zoom speed can be set to variable, constant (with 16 levels), fast, normal, or slow.

The DIGIC DV 4 Image Processor works in concert with the sensor to provide images with low noise and rich color depth. The processing power of the Digic DV 4 enables the simultaneous encoding of video to different codecs and bit rates for recording to two separate SD cards at the same time.

Canon Auto Focus (AF) features include natural-looking medium speed, instant, and face detection AF, which can significantly reduce the effort required when shooters need to keep a particular face in focus in a jostling crowd or similar situation.

Zebra bars selectable between 70 and 100% are available to help you judge exposure.

The camera can display and record color bars or color bars with reference tone. The color bars comply with the SMPTE standards. Reference tone levels can be set at -12, -18, or -20 dB.

The 3, 1,230,000-dot touch panel view screen enables rapidly moving through and selecting menu settings. The Color EVF is a 0.24 inch with 1,560,000 dots of resolution, and tilts up to 45° to accommodate different shooting positions.

The cameras body features five user assignable buttons so you can customize the camera to access features without having to enter the menu system.

The XA15 features an SDI output, as well as an HDMI port, and an AV mini terminal for composite video (and audio) via a four-pole 3.5mm mini-jack.

Double-slot recording: Allows you to record simultaneously to each of the two SD memory card slots, providing an instant backup for your footage.

Relay recording: The XA15 automatically switches video recording from one memory card to the other when the first memory card becomes full.

Engaging the Infrared (IR) shooting mode moves the IR Cut filter out of the optical path for shooting in extreme low-light conditions. An IR emitter built into the detachable top handle provides an IR source, and the built-in IR diffuser helps prevent IR hot spots on the subject. In IR mode, you can select from the traditional green hued IR image or the default setting, which produces a black and white image.

USB: An integrated Hi-Speed USB (mini-B) port allows you to download footage from the memory cards. This port is for output only.

The detachable top handle contains the audio controls and external XLR audio inputs, as well as a tally light, the infrared emitter, and an accessory shoe. You can remove the top handle from the camera to create an even smaller shooting package.

Photo capture: The XA15 offers the ability to capture 1920 x 1080 still images. Photos may be captured to an SD memory card during recording, as well as frame-grabbed during playback.

Pre-record: The XA15 continuously buffers approximately three seconds of video in memory. When you begin recording the contents of the buffer memory are added allowing you to capture footage before you press record.

Intelligent battery system: The XA15 is compatible with Canons Intelligent lithium-ion batteries, which communicate remaining running time (down to the minute) to the user.

Built-in Storage - Capacity GB
0 GB
Shipping Charges
Free standard shipping may be available on orders over a minimum amount (before taxes, fees, and promo codes). Shipping charges may vary based on item size and your shipping address. Want a shipping charge estimate? Simply add an item to your cart, then access the cart and enter your postal code in the shipping estimate section.
Processing Time
Most items ship within 2 business days after an order is placed*. Allow additional time for shipping to your address.
*Please note: If an item you ordered becomes unavailable, you'll be notified and a full refund will be processed within 2 business days.
Shipping Area Restrictions
Shipping is not available in the following areas*:
*Please note: Shipping area restrictions may vary for large items. If an item can't be shipped to your address, we'll let you know during the checkout process.
Product Category
Cameras and camcorders
Return/Exchange Period
30 days
Condition
Unopened (no restocking fee), Opened (a 15% restocking fee will be applied)
Learn more about returning a Marketplace product