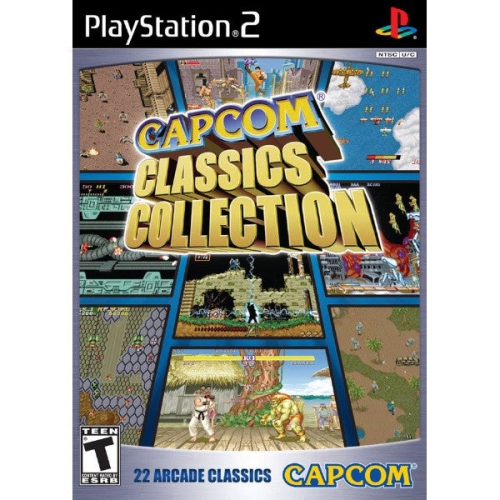 Capcom Classics Collection for Sony PS2 takes players back to the days of break dancing and waiting in endless arcade lines to see how long they can make their coveted quarter last.Spanning over 10 years of Capcom history, this anthology contains hundreds of hours of gameplay with treasured favorites including the WWII-style plane assault of '1942', defeating Metro City street gangs in 'Final Fight', rescuing Princess Guinevere against zombies and demons in "Ghosts 'n Goblins', the unforgettable title 'Commando', plus 18 other classics that everyone grew up with!All of these titles can be played in either single or two player modes while experiencing a bountiful of bonus features such as remixed soundtracks, original art and playing tips, just to name a few.Enjoy the arcade hits not available anywhere else! These retrospective works span nearly a decade of video-game history to take you back to the days of crowded arcades, pockets full of change, and the excitement of holding bragging rights to the high-score rankings. Go for the high scores and keep those quarters in your pocket!The collection includes the following 22 timeless classics:

·Plus extra unlockable items throughout the game!Features:

·One or two player modes so bring a friend!

·Bonuses such as soundtracks, art, and tips!See the ENTIRE PlayStation Collection!

Genre
Fighting
Shipping Charges
Free standard shipping may be available on orders over a minimum amount (before taxes, fees, and promo codes). Shipping charges may vary based on item size and your shipping address. Want a shipping charge estimate? Simply add an item to your cart, then access the cart and enter your postal code in the shipping estimate section.
Processing Time
Most items ship within 2 business days after an order is placed*. Allow additional time for shipping to your address.
*Please note: If an item you ordered becomes unavailable, you'll be notified and a full refund will be processed within 2 business days.
Shipping Area Restrictions
Shipping is not available in the following areas*:
*Please note: Shipping area restrictions may vary for large items. If an item can't be shipped to your address, we'll let you know during the checkout process.