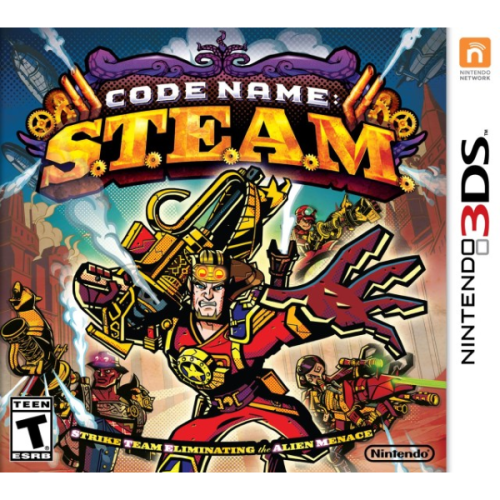 Command a strike team of unexpected heroes - assembled by Abraham Lincoln himself - to defend Earth against an alien invasion in Code Name: S.T.E.A.M. for the Nintendo 3DS.Harness the power of steam to scout, surprise, and annihilate enemies in this star-spangled blend of turn-based strategy and action gameplay.From the creators of the Fire Emblem and Advance Wars series comes a new take on tactical strategy. Battle through globe-spanning, alien-infested battlefields using a customizable four-member team comprised of diverse characters including folk-hero John Henry, adventurous Tom Sawyer and, the lion from Oz?It’s Lincoln versus aliens and I wouldn’t want to be the aliens.Features:

·Amiibo: By tapping an existing Fire Emblem amiibo character like Marth or Ike, or an upcoming one like Robin or Lucina, on the touch screen of the New Nintendo 3DS XL system, players can enlist their help in battle as playable characters.

·Strategy: Use planning and strategy to outflank and outsmart the enemy in fully 3D battlefields. Send an agent to higher ground to get a better vantage point, but be careful not to spread your team too thin.

·Battle: Battle through alien-infested maps by choosing using a four-member team comprised of diverse characters that have unique abilities and weapons, including folk-hero John Henry, adventurous Tom Sawyer, the lion from Oz and more.Click here to see the ENTIRE Nintendo Collection!