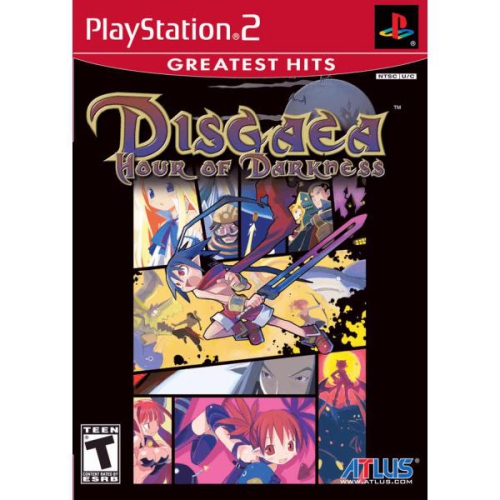 In Disgaea: Hour of Darkness from NIS America for the Sony PS2, change is imminent. The dark Netherworld has been overtaken by evil rulership and Prince Lahari, the rightful king, must fight his way back to the throne.As Lahari, assemble a massive army from over 150 character classes and monsters to decimate opposing forces!Decimate your enemies by upgrading your weapons and unleashing mind-blowing spells, special skills, and devastating group attacks. It's time for you to start acting like a king.Customize your army and utilize the formation attack system to battle the demons of the Netherworld...a place where evil reigns!Features:

·Unleash 100 deadly spells that destroy all your enemies.

·Open a portal to the Item World to increase the power of your weapons.

·Develop an unholy army with over 150 different characters and monsters.

·Incredible new gameplay system lets you adjust your combat strategies on the fly, and use new Geo Panels to achieve all-new tactical advantages.

·The King of the Netherworld is dead and his son, Laharl, has awakened from a coma to find demons scheming for supremacy. Laharl must now defeat these pretenders and take his rightful place on the throne!