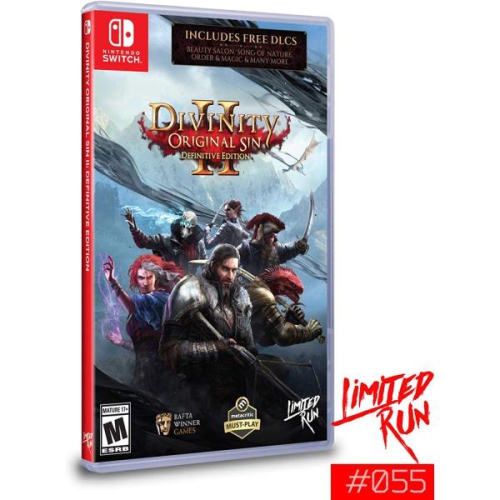 Divinity: Original Sin II - Definitive Edition from Larian Studios and Limited Run Games for the Nintendo Switch, the critically-acclaimed role-playing game that revolutionized the genre is now playable wherever you are in the world. However you play - alone or with friends - you can bring the adventure with you.The Divine is dead. The Void approaches. And the powers lying dormant within you are soon to awaken. Choose your role in a BAFTA-winning story, and explore a world that reacts to who you are, and the choices you make. With five races to choose from, and an adventure playable solo or as a party of up to four, lay waste to an oppressive order in a world afraid of magic. Become the God the world so desperately needs.Divinity: Original Sin 2 - Definitive Edition is the most complete version of the best-selling, Metacritic Must-Play RPG, and includes all current and to-be released DLC.A Game Where You Define The World; The World Does Not Define YouA flesh-eating Elf, an Imperial Lizard, or an Undead, risen from the grave? Discover how the world reacts differently to who - or what - you are. Whether Human, Lizard, Elf, Dwarf, or Undead, every member of your party can be romantic interest, ally, friend... or foe. Relationships are fragile on the path to Divinity. Our unique tag system, along with meaningful character traits, ensures that your character is unlike any other.Real, Untethered Freedom Unlike Anything Experienced BeforeGo anywhere, talk to anyone, and interact with everything. Kill any NPC, speak to every animal, and find your own solutions to quests by using your imagination rather than following a script. Even ghosts might be hiding a secret or two… Your spells and abilities make you a formidable opponent in combat, but can also be used to explore, experiment, and change the world.The Next Generation of Turn-based CombatWith a classless skill system combined with the personal traits you select for your character, you have access to a library of 200 skills through 12 skill schools. Elements like fire, poison, ice, and water can be combined for devastating attacks as well as crafty traps and ingenious quest solutions.There can only be one God. The Divine is dead. The Void approaches. And the powers lying dormant within you are soon to awaken...Features:

·Hundreds of additional tweaks and changes come with the Definitive Edition

·Choose from 6 unique origin characters with their own backgrounds and quests, or create your own as a Human, Lizard, Elf, Dwarf, or Undead. All choices have consequences.

·Go anywhere, talk to anyone, and interact with everything! Kill any NPC without sacrificing your progress, and speak to every animal. Even ghosts might be hiding a secret or two…

·Blast your opponents with elemental combinations. Use height to your advantage. Master over 200 skills in 12 skill schools. But beware - the game’s AI 2.0 is our most devious invention to date.Click here to see the ENTIRE Nintendo Collection!

4.7
Average rating based on 87 reviews

Of the 87 reviewers who responded, 83 would recommend this product.