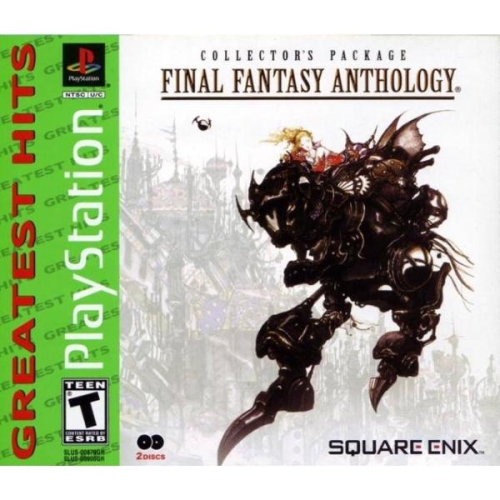 Final Fantasy Anthology from Square Enix for the Sony PS1 offers two complete games in one package, Final Fantasy V & Final Fantasy VI (originally Final Fantasy III on the SNES).This PlayStation release was created by Square Soft in response to demand from fans of the Final Fantasy series of role-playing games. Three compact discs contain the previously Japanese-only release Final Fantasy 5 and a 32-bit version of Japan's Final Fantasy 6 (which was originally released in the U.S. for the Super NES as Final Fantasy 3).In addition to these games, Final Fantasy Anthology contains a CD soundtrack by composer Nobuo Uematsu, made up of musical samples from both games.Final Fantasy VIn Final Fantasy 5, you control five characters who are trying to stop an ancient evil from returning to the world. At the start of the game the winds suddenly stop, leaving the lands mysteriously still. The king of Tycoon Castle decides to investigate the Wind Crystal (the world's source of wind) and disappears in the process. His daughter Reina sets out to find him but discovers a large meteor blocking her path. She then meets up with Bartz, a youth who lives his life as a traveler and adventurer, and Galuf, an old man who had been injured and has no memory of his past.When this group arrives at the sacred resting place of the Wind Crystal, they find the fabled gem shattered. The broken essence of the crystal speaks to them and reveals that they are the chosen ones - and are tasked to discover and stop an ancient evil. From here an epic adventure begins, one that will span three worlds on a quest for knowledge and the destruction of evil.In addition to its storyline, Final Fantasy V contains other unique elements. Most notable of these features is the Job System. When certain events take place, items will be acquired which allow new "job classes" to be used. Each job has specific abilities and the more Ability Points gained from each job, the better a character can become at those particular skills. This allows almost complete freedom for character advancement and another aspect of strategy in party development.Final Fantasy VIIn Final Fantasy VI, the opening story tells of an ancient war that took place a thousand years in the past. Battles were won and lost by the power of magic and the conflict came to be called the "War of the Magi." This terrible war devastated almost all of humanity. Now, centuries later, all magic has vanished from the world and high technology reigns in its place. Despite the power and advances gained through technology, there are those who would try and bring back the destructive powers of magic.As the game begins, you control a group of rebels called the Returners, who will stand against an empire bent on power and world domination. Someone is trying to revive magic and possibly cause another apocalypse. It is your job to prevent this. Although magic is not found in the world it can be channeled through Magicite, the mineral-like essence of an Esper, which is a being of pure magic. Magicite can be used to cast spells to summon its respective Esper for a short amount of time and can even improve the abilities of a character. Since each type of Magicite offers different spells and abilities, there is some strategy in deciding which one will go to which party member.Final Fantasy 6 spans two "worlds" and involves up to fourteen different party members. Being the last Final Fantasy game originally released for the Super NES, it is quite lengthy and will take on average 40-60 hours to complete.The two games on Final Fantasy Anthology are not exact replicas of their 16-bit counterparts, but they are very close. The game graphics are mostly unchanged, in 16-bit fashion like the originals.The sound, however, has been re-mastered to use the capabilities of the PlayStation console and is of a much higher quality than that of the Super NES versions!Features: