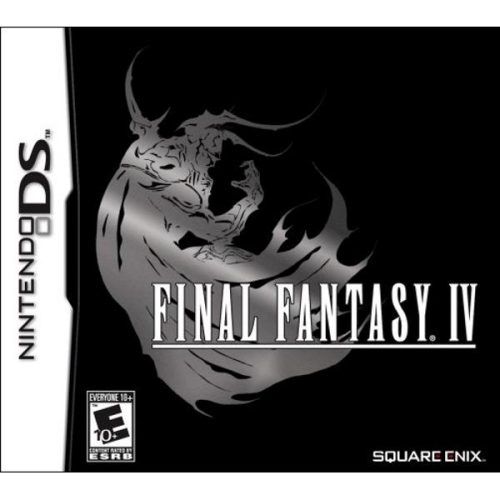 Witness the dramatic and thrilling story of Final Fantasy IV from Square Enix for the Nintendo DS and DSi, brought to life through astounding 3D graphics, gorgeous CG cutscenes and top-notch voice acting.The dark knight Cecil, stripped of his command of the Red Wings, set out for the distant Valley of Mist. Together with Kain, commander of the Dragoons, he would pursue a faceless quarry―and a chance for redemption. The advent of the airship had marked the realization of mankind's most ancient dream. But man is a creature seldom sated, and he was quick to dream anew.With the unparalleled might of the Red Wings, Baron's military soon reigned supreme. Why, then, does its king now seek the Crystals? And why have fearsome monsters suddenly begun to overrun the once calm land? If the Crystals know, they share no answers―only their pure and silent light.Four elemental Crystals, each possessing awesome power, lie scattered throughout the realm. However, men are quick to covet things which offer strength, and easily corrupted by the might which they possess. Seduced by the promised power of the Crystals, the kingdom of Baron begins employing unprovoked force to seize them from peaceful nations. The dark knight Cecil - Lord Captain of Baron's elite force, the Red Wings - is ordered by his king to obtain the Crystals, but soon begins to question the monarch's motives.Stricken with grief at his own actions, yet burdened by his loyalty to his country and his personal sense of honor, Cecil at last decides to turn from the path of darkness and destruction. Enraged, the king accuses him of disloyalty, strips Cecil of his command, and sends him off to slay a mysterious beast that lurks in the nearby Valley of Mist.Dive into the first RPG to incorporate the innovative Active Time Battle system, now further enhanced and refined for the Nintendo DS. Train and customize Whytkin by playing a variety of mini-games and challenge another player to head-to-head battle via local wireless connection.Cecil embarks on a fateful journey that will bring trials, betrayals, friendship, loss and self-discovery. Can Cecil open his eyes and become the man of honor that he must be?Features:

·Create a versatile party using the all-new Augment System - a dynamic system that allows the player to assign special abilities to characters.

·Train and customize Whytkin by playing a variety of mini-games and challenge another player to head-to-head battle via local wireless connection.

·Navigate effortlessly through the game with Nintendo DS Touch Screen functionality and stylus-driven controls while receiving vital assistance via the dual-screen presentation.Click here to see the ENTIRE Final Fantasy collection!

4.9
Average rating based on 13 reviews