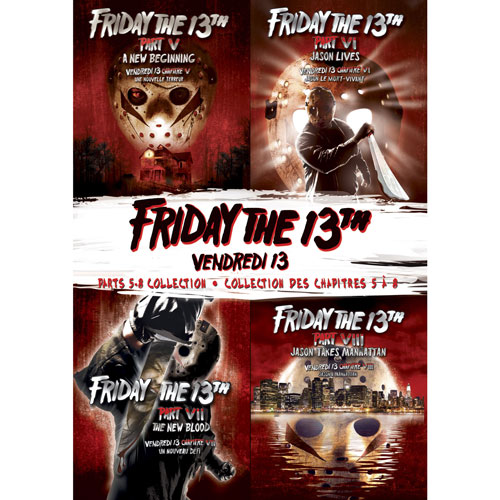 FRIDAY THE 13TH PART V - A NEW BEGINNING: Young Tommy Jarvis may have escaped from Crystal Lake, but he's still haunted by the gruesome events that happened there. When gory murders start happening at the secluded halfway house for troubled teens where he now lives, it seems like his nightmarish nemesis, Jason Voorhees, is back for more sadistic slaughters. But as things spiral out of control and the body count rises, Tommy begins to wonder if he's become the killer he fears most. Witness the true terror as Jason and Tommy battle once more in this spine-tingling descent into death and madness!

FRIDAY THE 13TH PART VI - JASON LIVES: As a child, Tommy Jarvis killed mass-murderer Jason Voorhees. But now, years later, he is tormented by the fear that maybe Jason isn't really dead. Determined to finish off the infamous killer once and for all, Tommy and a friend dig up Jason's corpse in order to cremate him. Unfortunately, things go seriously awry, and Jason is instead resurrected, sparking a new chain of ruthlessly brutal murders. Now it's up to Tommy to stop the dark, devious and demented deaths that he unwittingly brought about in this terrifying horror film that will take you to the grave and back!

FRIDAY THE 13TH PART VII - THE NEW BLOOD: What chance does a teenage girl have against a maniacal maniac with a machete? Pack your bags and return to Crystal Lake to find out for yourself, if you dare! Young Tina Shepard possesses the gift of telekinesis, allowing her to move things and see the future, using the power of her mind. But when a devious doctor tries to exploit her ability, the gift becomes a hellish curse. Tina unwittingly unchains the merciless bloodthirsty Jason Voorhees from his watery grave, igniting a bloodbath that ends in the ultimate showdown in strength of mind versus pure evil matter. Experience the legacy of unrelenting terror that never dies!

FRIDAY THE 13TH PART VIII - JASON TAKES MANHATTAN: After an electrifying return from the bottom of his Crystal Lake grave, indestructible psycho-slasher Jason Voorhees ships out to visit the Big Apple and paints the town red! High school senior Rennie Wickham is in for the ride of her life - and possibly her death - when she and her classmates take a graduation cruise bound for New York City. Little do they know that crazed serial killer Jason is a stowaway who quickly transforms the teen-filled "love boat" celebration into the ultimate voyage of the damned! Only a few survivors reach New York, where the bloody rampage spills into the gritty streets and subways of Manhattan in a deadly game of hide-and-seek - leading to a toxic confrontation with Jason for one last, final time.