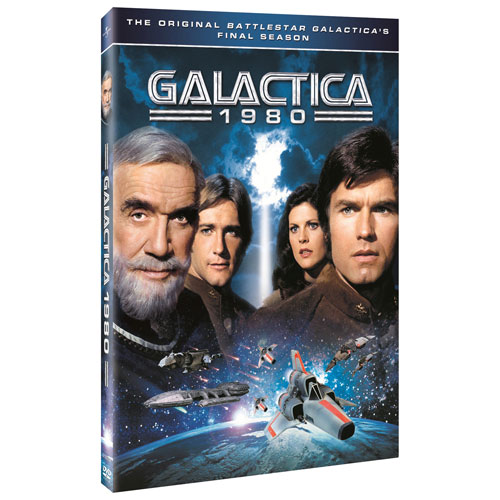 Galactica 1980 lands on DVD for the first time! With all 10 thrilling episodes on 2 discs, see what happens when the original Battlestar Galactica crew finally makes the long-anticipated descent to Earth.
$29.99
$2999
1 Special Offer Available
Sold and shipped by Best Buy

Galactica 1980 lands on DVD for the first time! With all 10 thrilling episodes on 2 discs, see what happens when the original Battlestar Galactica crew finally makes the long-anticipated descent to Earth.
With time running out and the Cylons closing in on their trail, Commander Adama and the Galactica must work harder than ever before to help Earth create the technology necessary for battle. Along for the action-packed fight are such stellar guest stars as Dirk Benedict, Brion James, Dennis Haysbert and more! It's an epic adventure unlike any other, and an absolute must-have for any Battlestar Galactica collection!
Genre
Action / Adventure
Format
DVD
Series or Collection
Complete Collection
Rating
PG (MPA Canada)
Year of Original Release
2013
Year of Disc Release
2013
Distributor
Universal Pictures Home Entertainment
Region
Multi-region
Aspect Ratio
1.33:1
Runtime
481 min
Number of Discs
2
Language
English
Subtitles
English
Actor/Actress
Lorne Greene; Kent McCord; Barry Van Dyke; Robyn Douglass

4.0
Average rating based on 5 reviews