Hasbro - Betrayal At House On The Hill 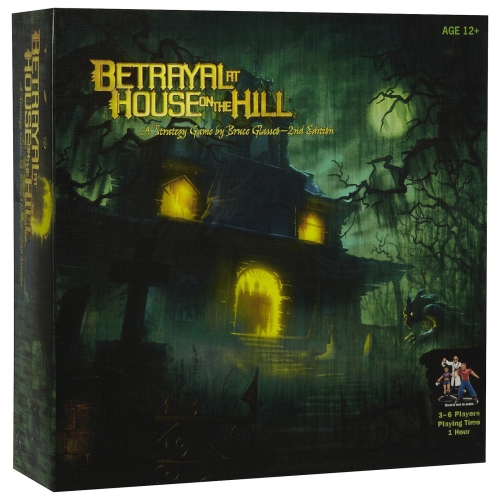 Hasbro - Betrayal At House On The Hill

Betrayal at House on the Hill from Wizards of the Coast quickly builds suspense and excitement as players explore a haunted mansion of their own design, encountering spirits and frightening omens that foretell their fate.The creak of footsteps on the stairs, the smell of something foul and dead, the feel of something crawling down your back – this and more can be found this award-winning and highly acclaimed game of strategy and horror.Betrayal at House on the Hill is a tile game that allows players to build their own haunted house room by room, tile by tile, creating a new thrilling game board every time. The game is designed for three to six people, each of whom plays one of six possible characters.Secretly, one of the characters betrays the rest of the party, and the innocent members of the party must defeat the traitor in their midst before it’s too late! Betrayal at House on the Hill will appeal to any game player who enjoys a fun, suspenseful, and strategic game.Betrayal at House on the Hill includes detailed game pieces, including character cards, pre-painted plastic figures, and special tokens, all of which help create a spooky atmosphere and streamline game play.Features multiple scenarios, a different lay-out with every game, and enough chills to freeze the heart of any horror fan!Features:

·Take A Deep Breath... It Could Be Your Last! - Fear grows with every new room discovered in a house filled with dreadful monsters and deadly secrets.

·Find something... Or Something Might Find You - Suspense and excitement quickly build as players encounter spirits and frightening omens that foretell their fate.

·Enormous Replayability -With 50 fiendish scenarios and dozens of danger filled rooms, a new haunted house is built room by room, creating a new story every time you play.

·The Haunt Awaits - As you brave your way through each unique room, you and the other explorers must rely on each other to survive the horrors that await... Until the house turns one of you against the rest!Click here to see the ENTIRE Toys & Games Collection!