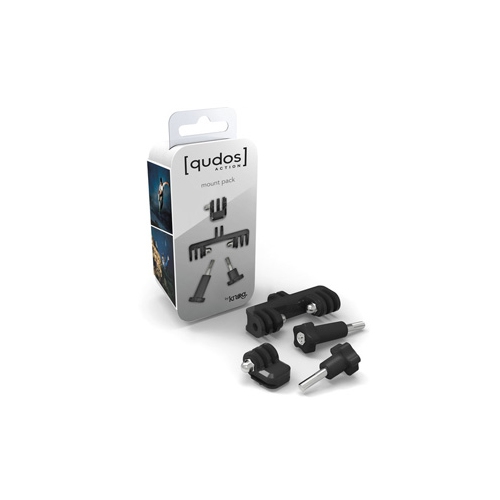 PRODUCT HIGHLIGHTSMount GoPro on Tripod or Cold ShoeTwo-Sided for Mounting a Light AlongsideConnects to Many GoPro Mounts TooCompatible with Qudos Action LED LightOVRVIEWThe Qudos Mount Brackets for GoPro HERO is a system that allows you to mount the GoPro on a standard 1/4"-20 tripod or on the cold shoe of a camera such as a DSLR
SAVE $15$10
$1000
Sold and shipped by CameraCanada
4.7 seller rating, 79 review(s)

Two-Sided for Mounting a Light Alongside

Connects to Many GoPro Mounts Too

The Qudos Mount Brackets for GoPro HERO is a system that allows you to mount the GoPro on a standard 1/4"-20 tripod or on the cold shoe of a camera such as a DSLR. There are two sides to the mount, one for the GoPro and one for an accessory that uses the GoPro mounting system - such as the Qudos Action LED light. The mount can also be attached to standard GoPro accessories, providing a way to mount the camera and an accessory - such as a light - on the same base mount as the camera.SPECIFICATIONS

Seller offers free standard shipping on all orders above $99 for Ground Regular Shipments to all areas except for rural areas.