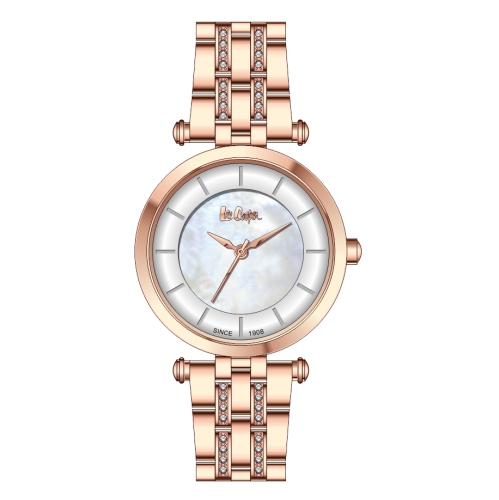 Lee Cooper Denim was established in 1908 in the East End of London which makes it the first authentic denim brand.

After establishing successfully in the fashion arena with over 5,000 points of sale including 500 mono-brand retail stores and instore areas in some of the world’s leading retail companies around the world, Since 1908 Lee Cooper expanded its operation very successfully offering life style complimentary products to complete the Lee Cooper total look.

The collection offers over 100s of different models made of highest quality materials and colorful designs for gents and ladies.

In order to last for years, all our watches are made of Supermetal, water resistance of 3 ATM, structure powered by Japanese leading punctual movements and decorated with shinning crystals.

Founded in London’s East End in 1908, Lee Cooper has a rich history spanning over a century, establishing its iconic status as the Original British Denim brand. From humble beginnings in workwear, our brand has become known as a global style innovator and the go-to-denim for legendary British rock ‘n’ roll bands.

The heritage of the pioneering principles established by Morris Copper have informed this latest line of premium selvedge denim – The Cooper Collection.

With the arrival of the First World War the company converted its production to military uniforms for the British troops.

In 1931, the company name was changed to M. Cooper (Overalls). And, at the start of World War II, the company was asked to make battle uniforms and denim fatigues for the British armed forces.

At the end of war, Lee Cooper started to reinvent jeans as fashion. Harold Cooper, Morris’s son, took over the factory after his father’s death and established the new direction of workwear to jeans production and the now famous brand name ‘Lee Cooper’ was born. Within two years, Lee Cooper was at the forefront of bringing denim jeans to the UK market.

Rock ‘n’ roll was born! Lee Cooper was the first ‘jeans brand’ to recognise the link between music and fashion, and has tapped into the vibrant undercurrent of musical youth ever since. Throughout its history the brand has worked with legendary artists including the Rolling Stones, UB40, Serge Gainsbourg and Rod Stewart. During the 1950s the brand also appeared in print advertising for the first time.

Lee Cooper made headlines by introducing the first jeans for women with a ‘front zip’, causing a stir and public outcry. The range for women increased in size and a wider selection of styles was put on the market. The vibrant 60s inspired a new range of Lee Cooper coloured jeans that took London by storm.

The 70s saw Lee Cooper’s innovative fashions assist in defining the disco decade. Hipster jeans were high trend and saw Lee Cooper work with Serge Gainsbourg and Jane Birkin who were constantly seen donning a pair of Lee Cooper jeans. In 1971 Lee Cooper turned heads across Europe with its mini skirt and the introduction of the first 32” bellbottom flair.

In the 1980s, a sponsorship with The Rolling Stones took the Lee Cooper brand across the world, establishing Lee Cooper as the go-to brand for rock stars and music fans. Legendary fashion photographer and artist Jean Paul Goude was brought on board to launch the first ‘jogging jean with his innovative, yet unorthodox approach to the campaign.

The long standing Lee Cooper logo was refreshed to the one that we recognise today. Lee Cooper also launched an exciting new collection called ‘3 by 1’ – the first five pocket slack jean to hit the market.

Lee Cooper collaborated with Europe’s ‘IT’ girl, French model and actress, Lou Doillon. The collaboration celebrated the brand’s heritage with previous brand ambassadors and Doillon’s parents, the legendary Serge Gainsbourg and Jane Birkin. During this time, Lee Cooper released a clothing range inspired by The Beatles.

Lee Cooper celebrated its 100th year anniversary. With a rich history as the original British denim brand and a century worth of expertise, Lee Cooper celebrated by supplying denim jackets and suits for over 1,200 members of the British Olympic and para-Olympic team for the opening ceremony of the 2008 Beijing Olympics.

Lee Cooper launches a highly collectible, artisan selvedge denim range – The Cooper Collection – a nod to where it all began for the brand in 1908 and a celebration of the craftsmanship and quality that has driven Lee Cooper ever since.

All refunds will be processed within 3 Days