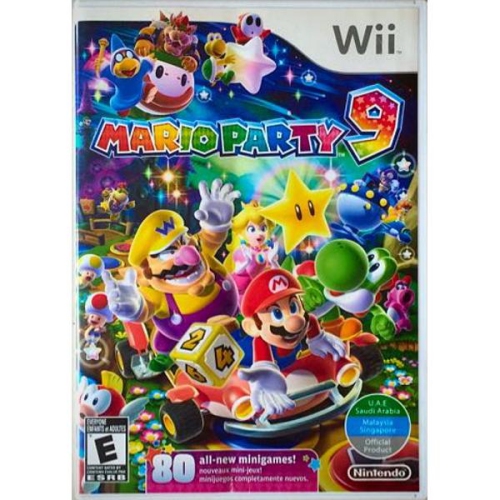 The party is back and bigger than ever in the Mario Party 9 game for the Nintendo Wii!Featuring all-new ways to play! For the first time in the franchise, boss battles crash the party and challenge players to compete to defeat a common enemy.In addition, players now travel across stages together in a vehicle towards a common goal - overcoming obstacles, battling bosses, and collecting Mini Stars stolen by Bowser and his minions.Featuring 80 new minigames, adventurous new stages, and all-new ways to play that blend cooperative and competitive action for up to four players, Mario Party 9 is the perfect way to get the party started! Features:

·A new feature is that all four players move around in a car.

·Like previous Mario Party titles, four players take part in each game, composed of a virtual board, and move around a variety of themed lands to collect coins and stars, while avoiding certain spaces.

·Minigames will re-appear, and have a larger focus on the gameplay than they did in the previous game.PLEASE NOTE: This IMPORT video game is REGION FREE and will play in all regions. However, Extra Content, DLC, and Online Services may not be compatible in your region without changing your console's region settings.

See our Region Compatibility List for full details!PLEASE NOTE: This IMPORT video game is REGION FREE and will play in all regions. However, Extra Content, DLC, and Online Services may not be compatible in your region without changing your console's region settings.

3.4
Average rating based on 46 reviews

Of the 46 reviewers who responded, 29 would recommend this product.