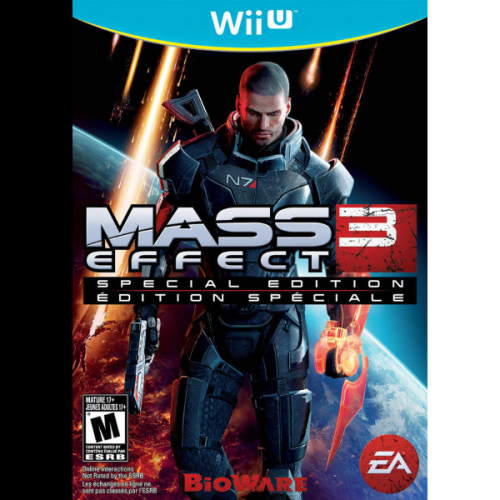 Mass Effect 3 from BioWare and EA Games for the Nintendo Wii U plunges you into an all-out galactic war to take Earth back from a nearly unstoppable foe - and how you fight that war is entirely up to you.Groundbreaking interactive storytelling drives the heart-pounding action in which each decision you make could have dire and deadly consequences. You are Commander Shepard, the only one who can save Earth from annihilation.BioWare makes its debut on the Nintendo console with the gripping blockbuster game of the year: Mass Effect 3 - coming to the Wii U with brand new features and content that fully take advantage of the Wii U's hardware. Command the battlefield like never before by using the WiiPad to issue commands and unleash devastating attacks.Bonus content includes a new mission and squad member, an exclusive new weapon, the Extended Cut ending, and an interactive backstory experience detailing previous events in the Mass Effect universe.Features:

·Interactive Storytelling: Mass Effect 3 plunges you into an emotional sci-fi story unlike any other where each decision you make will - completely shape your experience and the outcome of a galaxy-wide war for survival.

·Unleash a Customizable Arsenal: Build your character and squad with dozens of unique weapons and abilities, each with powerful upgrades and   modifications.

·A New Way to Wage War: Command the battlefield with the WiiPad as the Mass Effect franchise makes its debut on the Wii U with new features and   bonus content. "Mass Effect 3" features additional missions, weapons, and characters for both single player and multiplayer including the - Extended Cut ending and an interactive backstory experience.

·Class-Based Co-operative Multiplayer Missions: Fight the war alongside your friends in four-player co-op missions. Choose from a variety of   races and classes and combine your skills to overcome overwhelming odds. Your success can have an impact on the outcome of your single-player   experience.

4.5
Average rating based on 20 reviews

Of the 20 reviewers who responded, 19 would recommend this product.