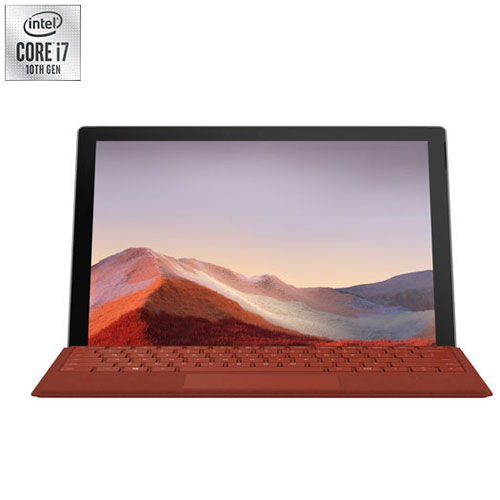 Geek Squad Protection goes above and beyond the manufacturer’s warranty. Whether you’re at home or on vacation, we can help you avoid costly repairs and replacements. Plus, starting a service request is as easy as visiting your local Best Buy store or connecting with at geeksquad.ca/protection.

2-in-1 Laptop Benefits Include

Create, work, and bring possibilities to life with Microsoft Surface Pro 7. Ideal for commuters and on-the-go professionals, this ultra-slim tablet boasts a 10th generation Intel Core i7 processor and 16GB of RAM. Note: Keyboard, mouse, dial, and pen are sold separately. Free Upgrade to Windows 11 when available (see below).

Upgrade rollout plan is being finalised and is scheduled to begin late in 2021 and continue into 2022. Specific timing will vary by device. Certain features require specific hardware, see https://www.microsoft.com/en-ca/windows/windows-11-specifications

Get 3 extra months of Microsoft 365 with your device purchase. Includes premium office apps and 1TB of cloud storage.
Year of Original Release
2019

4.7
Average rating based on 54 reviews

Of the 54 reviewers who responded, 52 would recommend this product.