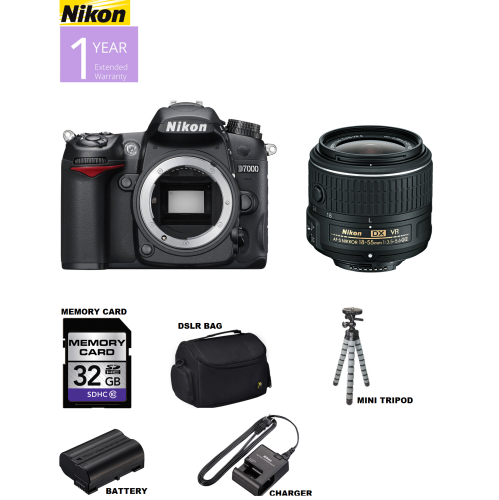 The D7000 is one of the worlds Best mid-level digital SLRs, both for stills photography and short videos.

The D7000 is made out of magnesium alloy to assure a lightweight, compact and robust body. The Camera utilizes a 16.2 Megapixels CMOS sensor and a fast EXPEED II Processor. The engine allows up-to 6 Frames per Second burst shooting.

The D7000 uses Nikons latest 39-Point auto focus system with fine tuning option including 9 cross-type sensors in the centre which provide a sharp image no matter where the subject is in the frame. The images can be processed in RAW, JPEG, and RAW+JPEG formats and can be saved to SD, SDHC or SDXC memory cards (the camera offers a Dual Slot).

The D7000 reduces the need for an after effect software since a retouch menu, including movie editing function and new color sketch is buit in it. The improved Picture Control System menus include a choice of scene, Color selection and effects. A wider preset option selection now introduce settings like Child, Night Portrait, Fisheye and Miniature.

The D7000 offers a terrific 1080p HD at 24 frames per second video mode. A more Internet-friendly 720p in 24 or 30fps is available too. The camera can record up to 20 minutes clips and it allows a Full Time Autofocus.

The Live view is displayed on a 3, 921k dot LCD screen that has a VGA wide-viewing angle (170?°) with reinforced glass, while the viewfinder has been upgraded to a Pentaprism optical one.16.2MP DX-Format Sensor + EXPEED 2 Image Processing System

Building upon the popular D90 DSLR, the Nikon D7000 captures breathtaking full 1080p HD movies with full-time autofocus and manual exposure control using the D-Movie function. To keep critical HD focus, users can choose to engage a variety of AF functions, including face priority to track up to 35 human faces, subject-tracking and normal or wide-area autofocus

Advanced movie features also allow exposure adjustment on the fly while recording. The D7000 DSLR offers variable frame rates and resolutions, and can record 1080p at a cinema-like 24fps, or a web-friendly 720p at either 24 or 30fps for up to 20 minutes per clip. Once recorded, users are able to edit and trim video clips in the camera to save time in post production. Whether utilizing a wireless or hot shoe mounted microphone, sound can be recorded via the stereo microphone input for professional audio results39 Point AF System

The D7000 DSLR features a 39 point AF System, which includes nine center cross-type sensors that operate with more than 60 NIKKOR lenses. The 39 points in the new Multi-CAM 4800DX AF module work together to provide superior subject acquisition and fast tracking capabilities, allowing photographers to confidently capture a player stealing third from the sideline to fast-moving wildlife. Additionally, photographers can activate dynamic or single point AF, configurable in combinations of 9, 21 or 39 or a 21 point ring to match a variety of shooting styles and situations. Photographers can activate 3D tracking, which continuously follows moving subjects within the 39 AF points, highlighting the activated AF point in the viewfinder3D Color Matrix Metering System + Scene Recognition System

Utilizing Nikons exclusive Scene Recognition System, the camera analyzes subject information from a database containing more than 30,000 images to optimize focus, exposure and white balance. To assist in creating amazing imagery, the Scene Recognition System reads data from a groundbreaking 2,016 pixel 3D color Matrix Metering sensor that examines the scenes brightness and color data then optimizes the cameras performance prior to the actual exposure. Another revolutionary Nikon first, this system interprets scene data for improved control of light metering and i-TTL flash output. Additionally this sensor allows for an Ambient white balance setting which can be activated to allow warm rendering in Automatic White Balance

The D7000 DSLR continues Nikons tradition of providing photographers the confidence to shoot in low light, knowing they will capture high quality low-noise images. The cameras native ISO range of 100-6400 affords the versatility to photograph in challenging lighting conditions, such as when indoors or in the evening. The ISO range can be expanded to a Hi-2 setting of 25,600, which was previously found only in Nikon FX-format territory. The camera allows more light to be gathered, resulting in a correctly exposed image that has less noise and finer grain