We’re here to get you what you need.
Shop online for pickup or delivery, or visit us in-store for a safe shopping and service experience.Learn more 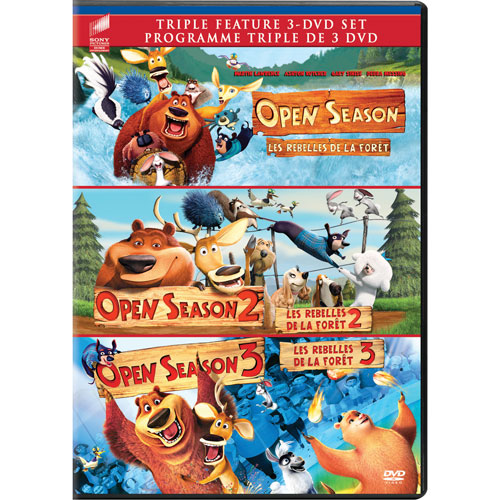 OPEN SEASON: Boog (Martin Lawrence), a domesticated grizzly bear with no survival skills, has his perfect world turned upside down when he meets Elliot (Ashton Kutcher), a scrawny, fast-talking mule deer. They join forces to unite the woodland creatures and take the forest back into nature's control!

OPEN SEASON 2: After falling head over hooves in love with Giselle, Elliot's road to the altar takes a slight detour when Mr. Weenie is kidnapped by a group of pampered pets determined to return him to his owners. Boog, Elliot, McSquizzy, Buddy and the rest of the woodland creatures launch a full-scale rescue mission for their sausage-shaped friend and soon find themselves in enemy camp: the world of the pets. Led by a toy poodle named Fifi, the pets do not plan to let Mr. Weenie go without a fight. Can a toy poodle REALLY bring down a 900-pound grizzly bear? Will Elliot ever marry Giselle?

OPEN SEASON 3: Boog, Elliot and all their forest friends return with an all-new adventure that is their fastest and furriest yet - this time in a Big Top Circus! When Boog's buddies can't make their annual guys-only getaway, he decides to take a trip by himself. Stumbling across a visiting circus, Boog switches places with a look-alike circus grizzly and takes over his part in the act. But when the circus decides to go back to Russia, it's a race against time for Elliot, McSquizzy, Mr. Weenie and the gang to rescue Boog before it's too late!