Other Guys The/ Step Brothers/ Talladega 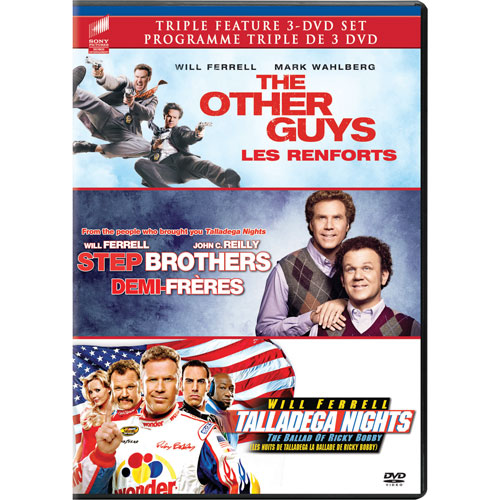 This 3-pack includes THE OTHER GUYS, STEP BROTHERS, and TALLADEGA NIGHTS.
$6.99
$699
1 Special Offer Available
Sold and shipped by Best Buy

This 3-pack includes THE OTHER GUYS, STEP BROTHERS, and TALLADEGA NIGHTS.

THE OTHER GUYS: From the director of Step Brothers and Talladega Nights comes this utterly hilarious action-comedy starring comedy favourite Will Ferrell and Mark Wahlberg as two New York City desk cops who take a chance to step up their game and solve a huge crime.

STEP BROTHERS: Brennan (Will Ferrell) and Dale (John C. Reilly) are two middle-aged loafers who are forced to live together when their parents get married. When the reluctant stepsiblings' immature antics over TV privileges and personal property take their toll on the marriage, the devious duo hatch a hysterical scheme to reunite the couple.

TALLADEGA NIGHTS: Losing his confidence after a spectacular crash, a dimwitted NASCAR driver goes to hysterical extremes to recover his nerve and make a comeback.