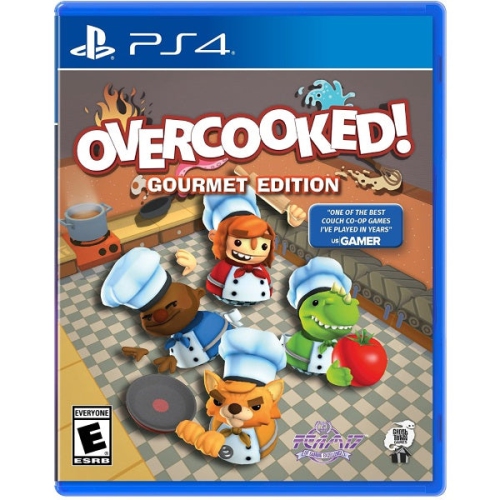 Overcooked from Team 17 for the Sony PS4 is a chaotic couch co-op cooking game for one to four players. Working as a team, you and your fellow chefs must pre...

Overcooked from Team 17 for the Sony PS4 is a chaotic couch co-op cooking game for one to four players. Working as a team, you and your fellow chefs must prepare, cook and serve up a variety of tasty orders before the baying customers storm out in a huff.

Sharpen your knives and dust off your chefs whites, there isn't mushroom for error and the steaks are high in these crazy kitchens!

The Onion Kingdom is in danger and only the finest cooking can save it! In Overcooked players must journey through a variety of cruel and unusual kitchens on their quest to become master chefs capable of conquering an ancient edible evil which plagues the land.

Play solo or engage in classic, chaotic couch co-op for up to four players in both co-operative and competitive challenge modes. You'll have to cook a range of different dishes and work together in order to become the most effective and ultimate team!

·New type of culinary co-op game. The Onion Kingdom is a rich world full of cruel and unusual kitchens for you to conquer.

·As you play the game you'll unlock new levels, new chef characters, and a competitive challenge where teams of 2 go head-to-head.

Genre
Simulation
Shipping Charges
Free standard shipping may be available on orders over a minimum amount (before taxes, fees, and promo codes). Shipping charges may vary based on item size and your shipping address. Want a shipping charge estimate? Simply add an item to your cart, then access the cart and enter your postal code in the shipping estimate section.
Processing Time
Most items ship within 2 business days after an order is placed*. Allow additional time for shipping to your address.
*Please note: If an item you ordered becomes unavailable, you'll be notified and a full refund will be processed within 2 business days.
Shipping Area Restrictions
Shipping is not available in the following areas*:
*Please note: Shipping area restrictions may vary for large items. If an item can't be shipped to your address, we'll let you know during the checkout process.
Product Category
Video games
Return/Exchange Period
Physical: 30 days. Digital Downloads: Not returnable.
Condition
Unopened