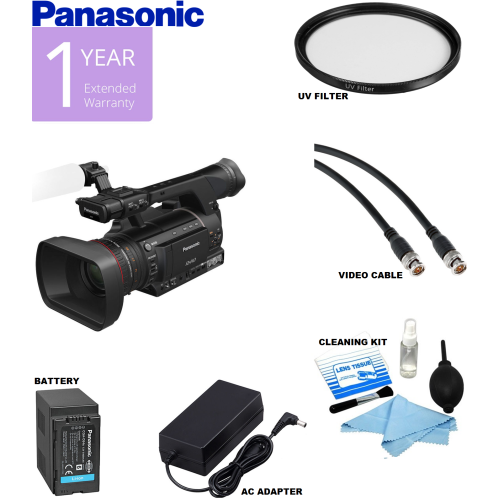 The Panasonic AG-HPX250 P2 HD Handheld Camcorder is the first handheld professional camcorder model to record the extremely high-quality AVC-Intra 100 Mb/s (10-bit 4:2:2) codec. Featuring an integrated 22x zoom lens and a 2.2 Mp 1/3-type 3MOS imager, the versatile HPX250 records not only AVC-Intra but also several flavors of DVCPRO (including DVCPRO HD) as well as DV. A variety of frame rates are possible in DVCPRO modes, for native slow- and fast-motion effects.

For video that will later endure heavy processing in the form of effects and other processes, the intra-frame compression options of the HPX250 are crucial. The AVC-Intra 100 codec is a perfect choice for any projects that involve tasks such as greenscreen shooting. The HPX250 could thrive as the second camcorder on an independent feature production, or as the go-to model for a freelance videographer who does a variety of jobs, from SD to HD – and with support for PAL/NTSC signal systems, it will cross oceans without missing a beat. Its compact size makes it hard to leave at home.Panasonic Optical Technology

Three manual rings – mechanical (cam-driven) zoom, focus, and iris – allow you to operate as if youve got an interchangeable-lens camcorder, for fine, tactile control over the parameters of the captured image

To compensate for any shaking of the operators hand, the HPX250 features an optical image stabilizer (OIS)

The CMOS sensor system uses a rolling shutter system that sequentially scans each line of pixels, thereby lowering power consumption vs. CCD cameras and enabling high-speed drive. But because the exposure timing differs for each line, when an external flash is used, it tends to produce images with a divided level of brightness from top to bottom. The HPX250 ameliorates this flash-band effect: it detects by comparing frame pairs and compensates to adjust the level

The DRS function automatically suppresses blocked shadows and blown highlights in scenes that involve wildly varying contrast levels (such as indoor vs. outdoor elements in the same frame). DRS estimates a gamma curve and knee slope to match the contrast of each pixel and applies them in real time, producing excellent gradation for each shade and minimizing blocked shadows and blown highlights

The cameras shutter speed is variable from 1/6 to 1/2000 second, plus theres a Synchro Scan function. As with gamma, matrix setting includes a Cine-Like mode. H & V detail levels are adjustable, as are detail coring and skin-tone detail. Thats not all: chroma level, chroma phase, color temperature, and master pedestal are all adjustable as well. The camera offers four settings for knee point: Auto, Low, Mid, and High

A convenient Focus Assist button expands the center of the LCD screen, allowing you to check for correct focus quickly & easily. A Focus Bar that indicates the focus level can be displayed on the LCD

The HPX250 features a dial for Set Scene, which allows you to choose an appropriate matrix of settings instantaneously. You can modified the six preset files if youd like, one set of which can be stored internally in the camcorder, and four more can be stored on an SD memory card

For cinematic 24-frame-per-second projects, the HPX250 supports 1080p recording at 23.98 fps (29.97 fps is also possible). For PAL regions, the camcorder is capable of recording at 1080/25pN and 720/25pN. The camcorder also records natively (without pulldown) in 720p modes, which results in recording efficiency that allows you to record for 2 to 2.5 times the duration allowed by pulldown recording. In pulldown mode with the DVCPRO HD codec, the camera applies a 2:3 pulldown to 23.98p, and a 2:2 pulldown to 29.97p, to record 1080/59.94i or 720/59.94p and 1080/25p over 50i or 720/25p over 50p. With 2:3:3:2 advanced pulldown, the 23.98pA mode is supported, allowing editing on many NLE systems with little image degradation. The camcorder also features a 59.94/50 Hz selector for worldwide compatibility and SD image acquisition with either 480 or 576 lines and aspect ratio conversion (select Side Crop, Letter Box, or Squeeze). This is an internationally compatible camcorder that can fit seamlessly into almost any production workflow

The AG-APX250 records high-quality 16-bit audio on all four channels. Freely select the audio source for each channel, choosing from built-in mic, external mic, and line in. Adjust the volume level for each channel