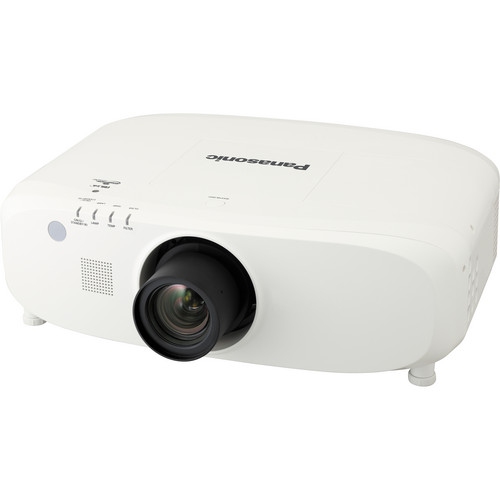 The PT-EW730ZU 3LCD WXGA Multimedia Projector from Panasonic features the standard zoom lens which has a throw ratio of 1.7 to 2.8:1, and can also work with other lenses from Panasonic, including short- and long-throw options. An installation class model, it outputs a brightness of 7000 ANSI lumens in standard mode (up to 7500 lumens in maximum) and features a native resolution of 1280 x 800 (WXGA) - other input resolutions are supported through scaling. Thanks to the flexibility of the lens system, the projector is suitable for deployment in a wide range of applications, including corporate conferences rooms, trade shows, houses of worship, lecture halls, medical imaging, and more.Six video inputs allow you to connect the PT-EW730ZU to just about any source, digital or analog. For computers and digital HD equipment there is a DisplayPort input, an HDMI input, and a DVI-D (digital only) input. A VGA input is provided for legacy analog computer sources, and there is a 5-BNC hybrid analog input for RGBHV, Component, Y/C (adaptable to S-video), or Composite. There is also a dedicated Composite RCA input and a total of three analog audio inputs; one on 2-RCA and two on 3.5mm mini jacks. Uncompressed video (and RS-232C control) can also be input through the Ethernet port when connecting to Panasonic Digital Link-compatible HDBaseT equipment. There is a 10 W mono speaker for audio output, and there is a variable audio output on a 3.5mm mini jack for connecting amplified speakers or a separate sound system.The PT-EW730ZU includes an IR remote and there is an IR extender port in case the projector is installed in such a way clean line-of-sight communication is not possible. It can also be remotely operated using RS-232C for use with automation and control systems like Crestron (with two inputs provided) or via Ethernet using either Panasonic control software or a regular Web browser. Interchangeable Lens Design with Standard Lens Included

Featuring an interchangeable lens design, the projector includes the standard lens, a motorized zoom lens with a 1.7 to 2.8:1 throw ratio. Additionally, it is compatible with a range of separately available lenses from Panasonic, including short throw, zoom, and long throw options.

A beamsplitting prism sends red, blue, and green light through three 0.76 monochrome LCD displays to render a video image. 3LCD design features no moving parts in the imaging system (although there is still a cooling fan) for an estimated 10,000 before first maintenance; and is free of the rainbow effect artifact sometimes perceived on colorwheel-based systems.

A single UHM type lamp provides 7000 lumens brightness in normal mode, and is estimated to last 3000 hours running at full brightness (4500 hours in Eco mode). To determine the ideal brightness level for your application, you will need to take into account the screen width, distance from the projector to the screen (throw distance), amount of ambient light near the screen, and the reflectivity (gain) of the screen surface used.

This projector features a 16:10 native aspect ratio. This is considered a widescreen format, and comes very close to the 16:9 standard of HDTV. This format is ideal if you plan to show HD video, and can still be used for presentations - though in the case of PowerPoints some extra space may be leftover on the sides. The projector can show 4:3 too; however black bars (pillaring) will have to be applied, or the image will have to be stretched or cropped to fit.

By dynamically adjusting the brightness, this projector can achieve an effective contrast ratio of up 5000:1. Factors such as the presence of ambient light, type of screen material, and the nature of the images being shown may reduce this figure

With this feature engaged, the projector will try to lower the brightness (up to 70%) whenever possible - such as during a dark scene - to extend lamp life. Color shift correction is employed to compensate for the shift in white balance as the brightness is modulated

For giving presentations or video conferencing you can show two images at once. Either picture-in-picture, where a smaller image is superimposed over the main image with the sub-window placeable in any of the four corners. Or you can place both images side-by-side giving them equal precedence.

Based on Valens HDBaseT technology, this hybrid interface allows the control (RS-232C) and an uncompressed digital HD video signal to be carried over a single Ethernet cable (CAT5e or higher) up to 328. The receiving device must also support HDBaseT - interoperability with regular baluns is not assured. Note: Digital Link requires a homerun connection between the two terminating devices or routing over dedicated HDBaseT hardware. It is not suitable for use with conventional IP networking infrastructure.

The filter is estimated to last 15,000 hours and can be replaced by the end-user