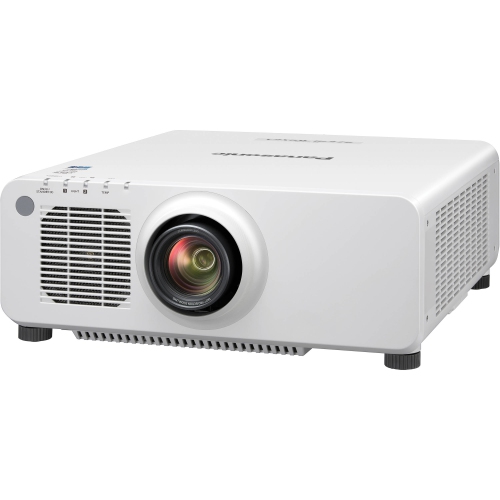 Panasonic PT-RW630WU OverviewThe white Panasonic PT-RW630WU 1-Chip 6500 Lumen Laser Light Source DLP Projector is a lamp-free WXGA projector that utilizes a filter-free design for 20,000 hours or more of 24/7/365 continuous and maintenance-free operation. With no lamp to replace, these projectors are designed for a more stable light output over a longer period of time. Projectors with lamps to replace may go through more frequent cycles of brightness and dimming, while the laser technology remains steady and brilliant during the same period. The laser engine is fashioned such that if anything were to go wrong with a single laser module, the projector would continue operation at up to 93% brightness. The laser light engine delivers a 10,000:1 contrast ratio with near pure white. The full power of the projector is used to make color without giving up some of the power to produce white for brightness.It also offers an array of features, including edge blending, pixel mapping, horizontal / vertical / 360° rotational mounting, and geometry control. The laser light source combined with an onboard sensor enables accurate color and brightness control when blending two or more projectors over longer periods of time.The PT-RW630WU will work with many 1-chip DLP lenses available from Panasonic, including the ultra short-throw ET-DLE030 lens. It also has three standard digital inputs including HDMI, DVI, and Digital Link. Digital Link is based on the HDBaseT spec for delivering 1080p audio and video content over 328 of Cat6e cable. Panasonic also adds its control protocol for complete integration with many control and networking products.6,000 lm brightness laser light source 1-chip DLP projector10,000:1 contrast ratioApproximately 20,000 hours of continuous operation during normal useLamp-free design allows for 24/7/365 continuous, maintenance-free operationSupports custom applications such as edge blending, pixel mapping, and projection on curved surfaces from any mounting position (vertical, horizontal, and / or tilting 360 degree projection)Detail Clarity Processor gives clarity to fine detailsSystem Daylight View enhances color perception, reducing the need to turn off the lightsFull 10-bit signal processingConstant Brightness mode contributes to long-term applicationsCooling system maintains quiet, long-term, stable operation while keeping the exhaust heat lowA filter-less, dust-resistant structure with an airtight optical block resist the effects of dust and other particles in the airMulti-Screen Support System seamlessly connects multiple screensMulti-Unit Brightness Control functionLens-centered designHorizontal/vertical lens shiftOmnidirectional installation capabilityAvailable optional lenses include the ET-DLE030 ultra-short throw lensDigital Link allows transmission of digital signals (HDMI, uncompressed HD video, and control signals) up to 328 ft. with a single CAT5e cable or higherThe optional ET-YFB100G Digital Interface Box makes setup easy for ceiling-mounted and other permanent installationsArt-Net compatibility simplifies system integrationTerminals include DVI-D and HDMI inputsMulti Projector Monitoring and Control Software allow multiple projectors to be managed together over a wired LANWeb Browser controlOptional Early Warning Software ET-SWA100 Series compatibleShutter function with fade in/out effect; processing time controllable between 0 and 10 secondPJLink compatibleP-in-P functionScheduling functionOptional ET-MWP100G Multi Window Processor for multi-screen solution