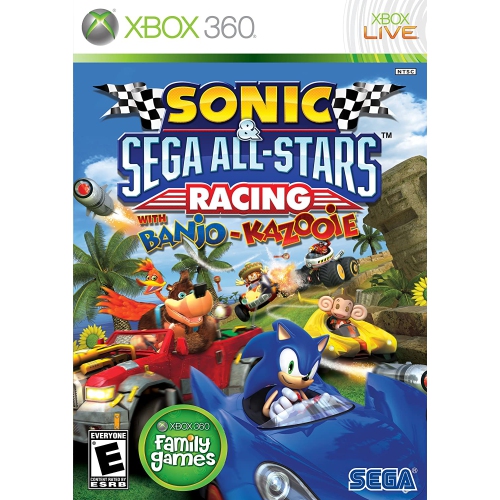 Features Subtitles & Menus in – English, Francais, EspanolFeatures Voice overs in – English, Francais, EspanolJoin Sonic and SEGA All-Stars in an all-new, high-speed, racetrack showdown! Explore stunning new circuits including Sonic Seaside Hill, Curien Mansion and Blizzard Castle as you zip around medieval castle ramparts, hurtle under lush rainforest canopies and tear through bustling cityscapes. Jostle against 20 challengers including Super Monkey Ball’s AiAi, Amigo from Samba and the evil Dr. Eggman in your unique character vehicle. Stay ahead of the pack by dodging traps and launching outrageous character moves such as the invincible Super Sonic or the Banana Blitz assault of monkey balls!Features

Party racing fun Battle it out in single player, challenge your friends in 4 player split-screen or compete in 8 player online action! Game modes include Grand Prix, Arcade and Time Attack.

All your favorite racers Choose from 20 different characters from the Sonic & SEGA universe including Sonic, Tails, AiAi and Amigo.

High Velocity Vehicles Every character drives their own unique vehicle including sports cars, bikes, monster trucks, planes and even a giant banana to perform special maneuvers!

All-Star moves Race by a competitor with a variety of pick-up weapons (missiles, mines and other obstacles) or one of the 20 unique character moves such as Tails’ tornado, Samba’s conga line, and much more!

Stunning visuals Race over medieval castle ramparts, under lush rainforest canopies and through bustling cityscapes as you battle through 24 challenging tracks from the Sonic and SEGA Universe.

4.3
Average rating based on 3 reviews