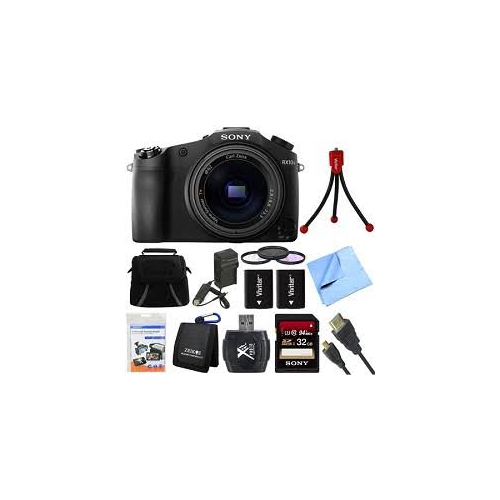 The Cyber-shot DSC-RX10 II Digital Camera from Sony is a compact, point-and-shoot camera that features a large 20.2MP, 1 Exmor RS BSI CMOS sensor producing high resolution still imagery and internal-recording UHD 4K video up to 30 fps, and super slow-motion video up to 960 fps. This sensors design utilizes a stacked CMOS image sensor with a DRAM chip and backside-illuminated technology to improve clarity and image quality when working in dimly-lit conditions as well as low-noise imagery and a sensitivity range of ISO 100-12800. The DRAM chip is integrated into the sensor, and combined with the BIONZ X processor allows for fast readout speeds, burst shooting up to 14 fps, and a maximum physical shutter speed of 1/3200 sec and a maximum electronic shutter speed of 1/32000 sec.The built-in, Carl Zeiss Vario-Sonnar T*, 8.3x optical zoom lens provides a 35mm-equivalent focal length range of 24-200mm, covering a broad range of focal lengths to provide versatile, multi-functional shooting from one zoom lens. A constant maximum aperture of f/2.8 is effective in low light and provides shallow depth-of-field focus control. Optical SteadyShot image stabilization is also available to help minimize the effects of camera shake when working in dimly-lit conditions and with greater zoom magnifications. The lens also features 7 aspherical elements including an Advanced Aspherical lens to minimize aberrations and distortion and Carl Zeiss T* anti-reflective coating, which helps to reduce surface reflections, lens flare, and ghosting in order to produce imagery that is rich in contrast and clarity. A Direct Drive, Supersonic Wave Motor (SSM) provides fast and smooth autofocus action while Eye AF enables precise eye-detection focusing with confirmation that a subjects eye is in focus even if their head is partially turned. Flexible Spot areas allow precise focus placement, and Lock-on AF keeps focus locked on a moving subject, even if that subject leaves the frame momentarily. Seamless close-up shooting is also supported, which no longer requires the need to switch to a dedicated macro mode, for focusing on subjects as close as 1.2.For image composition and playback, the RX10 II features a large 3.0, 1228K-dot, Xtra Fine LCD monitor with a tilting design to better serve working from high and low angles. WhiteMagic technology is incorporated into the display to increase the effective brightness of the screen. Also, the XGA OLED Tru-Finder electronic viewfinder integrates four aspherical elements for sharp eye-level composition. An automatic eye-sensor recognizes when an eye is at the viewfinder and illuminates the EVF while turning off the LCD.UHD 4K video is supported up to 30 fps in XAVC S format thanks to a high-speed front-end LSI which processes the data with full pixel readout with no line skipping or pixel binning. The XAVC S format allows for high-bitrate shooting up to 100 Mbps. A built-in stereo microphone and an external mic jack are provided as is a headphone jack from audio monitoring. Professional features such as full manual exposure control and uncompressed off-camera recording are also supported.Built-in Wi-Fi and NFC (Near Field Connectivity) allow for easy wireless connections to smartphones and tablets in order to transfer images for sharing as well as to use your smartphone as a remote control via the free Sony PlayMemories app.The compact magnesium alloy body of the RX10 II is moisture and dust resistant. It offers a built-in pop-up flash as well as the Sony Multi-Interface shoe for connecting flashes, microphones, lights, monitors, and other accessories. A multi-compatibility card slot enables the use of SD series, micro-SD series, and Memory Stick memory cards. A selectable click or click-less manual control ring on the lens lets you adjust numerous camera settings without taking your eye from the image and customizable buttons provides fast access to the camera settings that you need most. 20.2MP 1 Exmor RS BSI CMOS Sensor

The 1 stacked CMOS image sensor with DRAM chip offers a fast electronic shutter speed of up to 1/32000. The Exmor RS sensor not only enhances efficiency and speed of A/D conversion through its stacked structure with more circuit sections; it also realizes over five times faster readout speed of the previous RX10 thanks to a DRAM chip integrated into the sensor structure. This processing speed allows for 20.2-megapixels at up to 14 fps continuous shooting, 4K movie and super slow-motion HFR (High Frame Rate) recording of up to 960 fps (40x) movie clips - not to mention better low-light low-noise capability.

Also benefitting the image quality, as well as overall camera performance, is the BIONZ X image processor. It faithfully reproduces details and rich tones with lower image noise than was previously possible. Performance speed is also impressive including full-resolution continuous shooting up to 14 fps, high-speed auto focusing and UHD 4K video recording. Still images can be recorded in JPEG or RAW file formats or both simultaneously.

In addition to the physical shutters max speed of 1/3200 sec. even faster shutter speeds of up to 1/32000 sec. are possible thanks to a dramatically accelerated sensor readout. The accelerated electronic shutter readout minimizes distortion caused by rolling shutter phenomenon. This new fast Anti-Distortion Shutter system can capture shots of swiftly moving subjects without altering their shape as conventional CMOS sensors tend to do. Additionally, the super high-speed shutter gives you freedom to shoot photos with de-focused backgrounds by using large aperture settings under very bright lighting conditions. This is achieved by a combination of 1/32000 super high speed shutter and built-in ND filter that allows photos to be shot in extremely bright light at a maximum of EV19 with a fully open aperture.

Built-in wireless connectivity enables the RX10 II to instantly transfer imagery to mobile devices for direct sharing with social networking sites, via email, and to cloud storage sites. NFC (Near Field Communication) is also supported, which allows for one-touch connection between the camera and compatible Android mobile devices; no complex set-up is required. This technology when used with the free Sony PlayMemories Mobile app also provides the ability to use Smart Remote Control, which provides for remote shutter release that is controlled by a smart device.