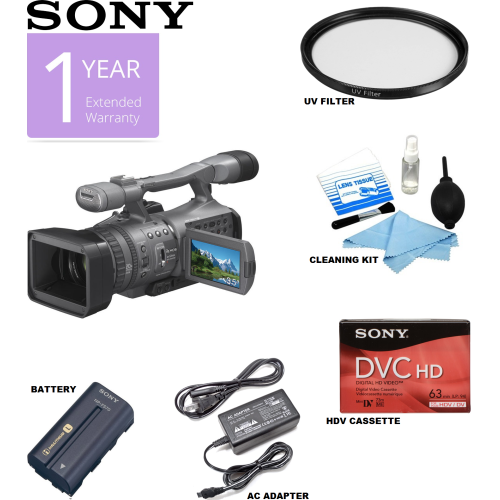 The Sony HDR-FX7 is a lightweight camcorder capable of delivering 1080i video via MiniDV tapes using the HDV format. This camera bears some resemblance to the Sony HDR-FX1 in both form and function, but boasts a few changes sure to entice consumers, enthusiasts and professionals alike.The camera comes equipped with three CMOS sensors. These sensors are arranged in the same manner as the more prevalent 3CCD cameras, one for each color channel. Sonys CMOS ClearVID technology helps increase resolution and image clarity while keeping the camera compact enough to take almost anywhere.Additionally, the camera features both HDMI (High Definition Media Interface) output, along with optical image stabilization. All of this, combined with Sonys reputation for durability and reliability, makes the HDR-FX7 a perfect solution for news and event videography.High Definition on MiniDV Tapes with HDV

The HDV format used in the HDR-FX7 allows high definition recording on standard MiniDV tapes! This is accomplished by using the very popular MPEG-2 compression technique used in many applications, including DVDs.

Sonys ClearVID sensors are positioned at a 45° angle. Since each pixel is positioned at this angle the result is far clearer diagonal lines. Images will appear crisper, without the apparent jaggies that often plague video signals.

Many consumer products are adopting High Definition Media Interface (HDMI) connections for transmitting uncompressed digital HD video signals. Sony incorporates this into an already extensive array of video output choices on the FX7. Simply hook the camera up to your HDTV via this interface and view all your footage the way it was meant to be seen: purely digital!

The FX7 has shaved off a few pounds in comparison to its big brother, the FX1, weighing in at less than 4 lbs! Not only will users be able to take this feature-rich camera almost anywhere, the reduced arm strain enables longer shoots.

Sony has incorporated the sophisticated Super SteadyShot® optical stabilization system on the HDR-FX7. This technology helps users achieve glass-smooth shots even when conditions are less than forgiving.

Focusing high definition can be very difficult on smaller LCDs. Their size makes it very hard to discern whether a scene is completely in focus or not. Sonys answer to this phenomenon is to give users the ability to zoom in; by localizing a segment of the frame, verifying focus becomes worlds easier.

The 20x lens fitted to the FX7 can be very useful when subjects are further away, such as when shooting live events and sports.

The FX7 features both a zoom and focus ring capable of making precise adjustments while having the tactile feeling of manual controls.

Buttons can be mapped to a variety of different functions on the outside of the unit, allowing users to customize the camcorder for their specific needs. This can be very useful, especially if different situations demand several user-defined controls being readily available.