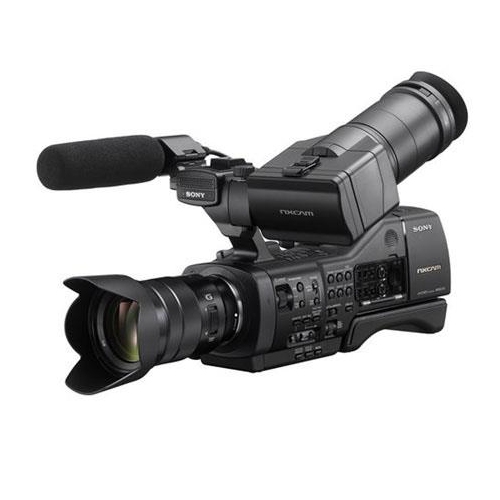 The Sony NEX-EA50M NXCAM Camcorder with 18-105mm f/4 Servo Zoom G Lens brings large-sensor, Full HD video recording to the masses. Itinherits the same versatile semi-shoulder mount design from its predecessor--the NEX-EA50UH--but adds an updated Exmor APS HD CMOS sensor and replacesthe 18-200mm E-mount lens with an 18-105mm f/4 constant aperture Servo Zoom G lens. The lens provides quiet and continuous variable focus, zoom, andiris operation and features Optical SteadyShot image stabilization for smoother footage whether the camcorder is in your hands or on your shoulder.The camcorders E-mount allows you to use native Sony E-Mount lenses, such as the included 18-105mm servo zoom, as well as virtually any SLR, DSLR, orcine lenses through the addition of optional third party adapters. Behind the lens mount, youll find a large APS-C sized CMOS sensor. Similar in sizeto Super 35, the APS-C sensor allows for cinematic images with a shallower depth of field than smaller sensor camcorders. The sensor can capture up to1080p video at 24, 25, 30, 50, or 60 frames per second using the AVCHD codec, as well as still photos up to 16.1 megapixels. For professional audiocapture, the camcorder has two XLR inputs, with an ECM-XM1 shotgun microphone included.Media is recorded to an SD/SDHC/SDXC or Memory Stick PRO Duo card. The camcorder supports MS-PX Mirroring Memory Stick cards, which allows for twodistinct segments to be recorded simultaneously to a single card, with built-in Error Correction Code to catch and correct errors as they happen. Youcan also connect and record to Sonys optional HXR-FMU128, a flash memory unit with a 128GB capacity. When connected, you can even simultaneouslyrecord HD video to the flash memory unit and the internal memory card for instant backup.Footage is monitored using a 3.5 touchscreen LCD. When using an E-mount lens, you can active the Touch Focus function and pull focus simply bytouching the LCD where you want the camera to focus. E-mount lenses also allow you to take advantage of the camcorders face detection feature. Otherfeatures include a built-in hot shoe, LANC remote control port, and GPS location tagging.Sony E PZ 18-105mm f/4 G OSS Lens

The Sony E PZ 18-105mm f/4 G OSS Lens is a wide-ranging zoom lens that provides a 35mm-equivalent focal length range of 27-158mm, coveringwide-angle to telephoto perspectives. A constant f/4 maximum aperture offers consistent performance throughout the zoom range and is especiallybeneficial when working with greater zoom magnifications in low-light conditions. Also benefiting working in dim light or at the long end ofthe zoom range is Optical SteadyShot image stabilization, which works to minimize the appearance of camera shake by up to four shutter speedsteps. Variable zooming speed is electronically controlled by zoom rocker levers located on the camcorders handgrip, top handle, on the lensitself, or remotely with a LANC compatible controller.

The camcorders Sony E-mount accepts native Sony E-mount lenses, as well as virtually any 35mm SLR, DSLR, and 35mm cine lenses via optionallens adapters. This means that you are not locked into one lens brand or mount, freeing you up to use current lenses you own in addition to the18-105mm Servo Zoom G lens included with the camcorder.

The NEX-EA50M is equipped with a new Exmor APS HD CMOS sensor designed for shooting Full HD video and 16.1 megapixel still photos. The APS-Csensor is similar in size to Super35, letting you capture cinematic images with a shallower depth of field than on smaller chip camcorders.

The NEX-EA50M is capable of shooting in 50Hz or 60Hz TV systems; enabling users to produce content for clients around the world. As in otherNXCAM camcorders, the internal recording format is AVCHD 2.0.

Secure Digital memory cards offer professional grade read/write speeds and dependability at previously unheard of prices. The NEX-EA50UHsupports both SD and Sony Memory Stick formats. However, it also features an FMU slot for connecting Sonys HXR-FMU128, a flash memory unitwith a capacity of 128 GB. Simultaneous HD-HD recording to the memory card and FMU128 is possible.

In addition to video, the NEX-EA50M can also capture still images up to 16.1 megapixels. Its mechanical shutter enables capturing fast movingsubject. The photo-trigger button functions similar to still camera; push it halfway to set focus and exposure and then press it all the wayhome to take the picture. Its top handle mounted hot-shoe accepts a flash.

Thanks to the high pixel density of its Exmor APS HD CMOS sensor, the NEX-EA50M is capable of performing up to 2x smooth, variable speeddigital zooming when the camera is equipped with fixed focal length or manual zoom lenses. Digital zoom is controlled by the zoom rockers onthe camera and via LANC compatible remote.

When the NEX-EA50M is using E mount lenses, you can turn on the Touch Focus function which enables pulling focus by simply touching the pointon the cameras LCD touch panel where you want the camera to focus on. You can also store and pull focus between two distinct focus points viathe Focus Transition function, with transition time programmable from 0.5 seconds to 90 seconds, in 0.5 second increments.

The NEX-EA50M is compatible with the MS-PX series Mirroring Memory Stick. These memory cards are equipped with a unique mirroring functionthat more reliably backs up and secures file-based footage acquired on NXCAM camcorders. The mirroring function essentially lets users recordto two distinct segments on the memory card simultaneously, giving the shooter access to the undamaged segment if errors occur to the othersegment. A built-in Error Correction Code (ECC) catches and corrects errors as they happen and a Data Refresh feature moves data over to thesafe zone on the undamaged segment before the error damages the card.

A built-in GPS function automatically records absolute time and location information every half second of a shoot to AVCHD files.