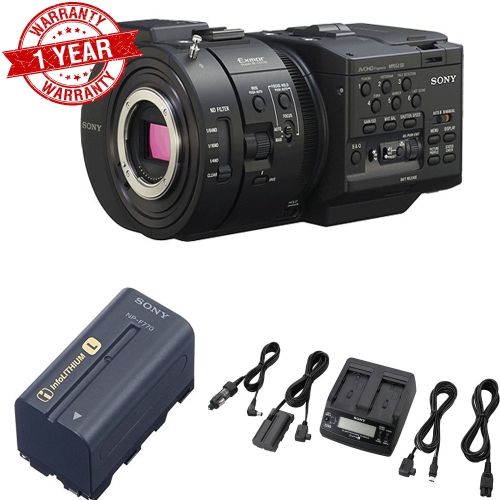 Sony NEX-FS700 OverviewThe Sony NEX-FS700U Super 35 Camcorder (Body Only) is a fully professional large-sensor video camera. Hot on the heels of the FS100, this compact, highly modular camera uses a very similar-sized Super 35 CMOS sensor as the FS100. But as a marked improvement over that earlier models sensor, the FS700 features a native 4K resolution sensor.Unlike smaller, broadcast-style sensors or the larger full-frame sensors of some DSLRs, the NEX-FS700s imaging area matches that of standard Hollywood film cameras, providing complete compatibility with cine-style film lenses (sold separately). The sensors large size offers a variety of other advantages, including increased control over depth of field, higher sensitivity in low light, lower image noise, and an exceptional dynamic range.Able to shoot full 1080p video in a range of frame rates up to 60p, the FS700 provides the option of recording AVCHD footage onto SD card/MemoryStick or via the FMU (flash memory unit) port, or it can output 4:2:2 video (with embedded timecode) via HDMI 1.4 or 3G/HD-SDI to an external recording unit. Simultaneous recording to both is also possible when instant backup is called for. Theres no stinting on audio, either, as the camera includes not only a shotgun microphone with mount/carrying handle, but dual XLR inputs for recording uncompressed, professional-level sound from an external source.One unique feature for a camcorder of this class is the FS700s ability to record bursts of super-slow motion video at rates up to a whopping 960 fps. (These bursts range from 8 to 16 seconds, depending of the frame rate). Full-resolution recording is possible at up to 240 fps; at 480 and 960 fps, resolution is reduced.The 3G/HD-SDI port will get expanded capability when a future firmware and hardware upgrade is available (not included). This will allow 4K output via the BNC as a data stream, which can be recorded to an optional Sony 4K recorder.Other included features--such as a 3.5 LCD panel with detachable with viewfinder attachment, super sensitivity, a built-in ND filter and up to 960 fps super slow motion, all help to set this model in a class truly by itself. Not only will it intercut perfectly as a 2nd unit or B camera, it can stand on its own in applications as diverse as indie film, commercials, music promos and education.ISO 500 (0 dB) to ISO 16,000 (30 dB) sensitivity

Runs cool, no grain and no fan noise