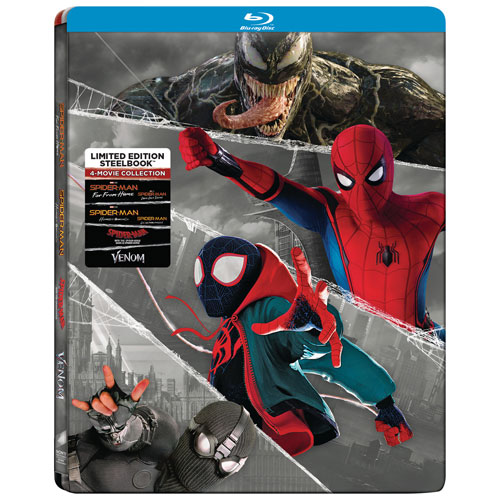 This 4-movie collection includes SPIDER-MAN: FAR FROM HOME, SPIDER-MAN: HOMECOMING, SPIDER-MAN: INTO THE SPIDER-VERSE, and VENOM.
Sold and shipped by Best Buy

Following the events of AVENGERS: ENDGAME (2019), Spider-Man must step up to take on new threats in a world that has changed forever.

Peter Parker balances his life as an ordinary high school student in Queens with his superhero alter-ego Spider-Man, and finds himself on the trail of a new menace prowling the skies of New York City.

SPIDER-MAN: INTO THE SPIDER-VERSE

Teen Miles Morales becomes Spider-Man of his reality, crossing his path with five counterparts from other dimensions to stop a threat for all realities.