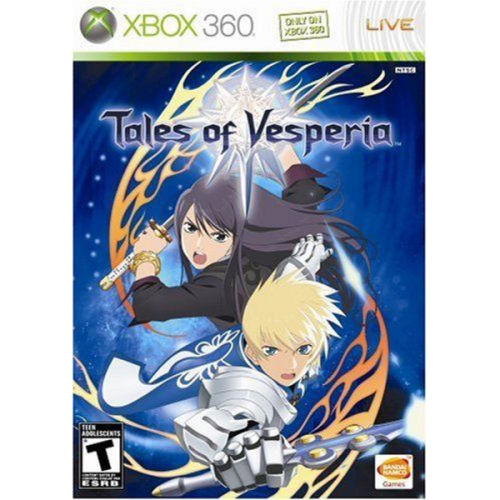 The debut of the Tales series on the Xbox 360, Tales of Vesperia from Bandai Namco launches the series to new heights of interactive narrative and engrossing gameplay with incredible anime-style graphics, a captivating storyline and characters as well as an upgraded battle system.Set in a world reliant on a mysterious ancient technology known as "blastia," the game follows former knight Yuri as he delves into a shadowy plot to use these magical devices to control civilization, or destroy it.Features:

·Immersive look and feel - Detailed environments, animation and an artistic style so good, it's like playing a cartoon

·Dramatic story - Gripping tale of a young hero on a quest for justice, trust and friendship filled with unexpected twists and turns at every step

Genre
RPG & Strategy
Shipping Charges
Free standard shipping may be available on orders over a minimum amount (before taxes, fees, and promo codes). Shipping charges may vary based on item size and your shipping address. Want a shipping charge estimate? Simply add an item to your cart, then access the cart and enter your postal code in the shipping estimate section.
Processing Time
Most items ship within 2 business days after an order is placed*. Allow additional time for shipping to your address.
*Please note: If an item you ordered becomes unavailable, you'll be notified and a full refund will be processed within 2 business days.
Shipping Area Restrictions
Shipping is not available in the following areas*:
*Please note: Shipping area restrictions may vary for large items. If an item can't be shipped to your address, we'll let you know during the checkout process.
See our return policy to find specific return information for this product and steps on how to return by mail.