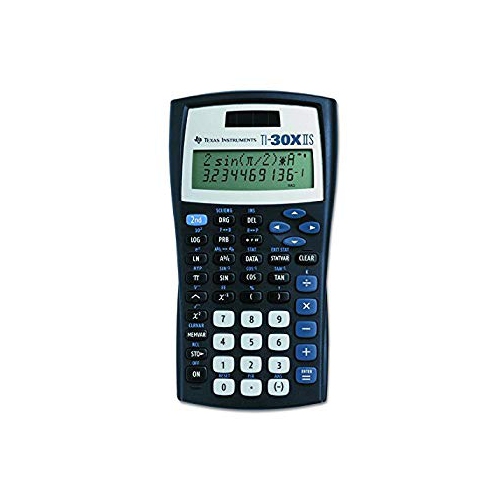 Color Name:Black -The Texas Instruments TI-30X IIS 2-Line Scientific Calculator features two-line display and other advanced features users get with the TI-30X IIS. The display shows the equation you are creating on the top line, and the numbers or symbols you are currently entering on the second line. Once the equation is solved, the results are displayed on the second line, and you can use the four arrow keys on the front of the calculator to edit the original equation in any way you like for a recalculation. Better still, pressing the up arrow repeatedly lets you browse through a cache of dozens of previous calculations, meaning you can look back to see the answer to a problem. The device uses solar power when possible but can fall back on the internal batteries (which are included) if there isn't enough light. There are three angle modes (degrees, radians, and grads), scientific and engineering notation modes, and even one- or two-variable statistical modes. Five variables can also be assigned to their own memory slots. The calculator comes with a Snap-On cover that fits on the back of the device. Key Features: Two-line display Fraction features Conversions Basic scientific and trigonometric functions Edit, cut, and paste entries Solar and battery powered One- and two-variable statistics Ideal For: General math Pre-Algebra Algebra 1 and 2 Geometry Statistics General science