The Witcher 3: Wild Hunt - Game of the Year Edition [PlayStation 4] 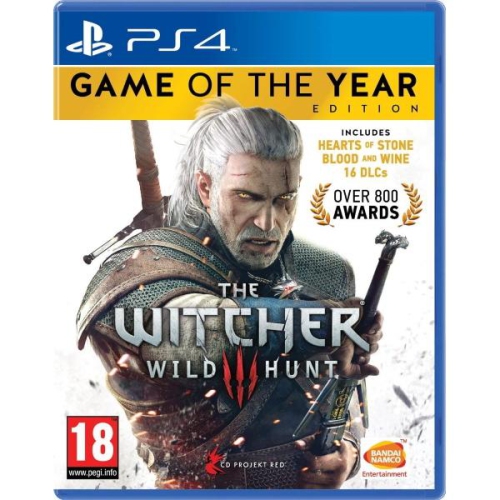 The Witcher 3: Wild Hunt - Game of the Year Edition [PlayStation 4]

The Witcher 3: Wild Hunt from CD Projekt Red Studio and Bandai Namco for the Sony PS4 is a story-driven, next-generation open world role-playing game set in a visually stunning fantasy universe full of meaningful choices and impactful consequences. The Witcher 3: Wild Hunt Game of the Year Edition brings together the base game and all the additional content released to date.In The Witcher: Wild Hunt an ancient evil stirs. An evil that sows terror and abducts the young. An evil whose name is spoken only in whispers: the Wild Hunt. Led by four wraith commanders, this ravenous band of phantoms is the ultimate predator and has been for centuries. Its quarry: humans.The Witcher must bring all his abilities to bear in confronting this ancient force, these ghastly spectral riders who for ages have brought misery to the world. For this time the Hunt seeks just one person: the one individual Destiny itself entrusted to Geralt. The one soul Geralt considers kin.Includes the Hearts of Stone and Blood & Wine expansions, which offer a massive 50 hours of additional storytelling as well as new features and new areas that expand the explorable world by over a third!Affords access to all additional content released so far, including weapons, armor, side quests, game modes and new GWENT cards!

Features all technical and visual updates as well as a new user interface completely redesigned on the basis of feedback from members of the Witcher Community! Features:

·Play as a Highly Trained Monster Slayer for Hire.

·Trained from early childhood and mutated to have superhuman skills, strength, and reflexes, witchers are a socially ostracized counterbalance to the monster-infested world in which they live.

·Gruesomely destroy foes as a professional monster hunter armed with a range of upgradeable weapons, mutating potions, and combat magic.

·Hunt down a wide variety of exotic monsters, from savage beasts prowling mountain passes to cunning supernatural predators lurking in the shadowy back alleys of densely populated cities.

·Invest your rewards to upgrade your weaponry and buy custom armor, or spend them on horse races, card games, fist fighting and other pleasures life brings.

·Built for endless adventure, the massive open world of The Witcher sets new standards in terms of size, depth and complexity.

·Traverse a fantastical open world: explore forgotten ruins, caves and shipwrecks, trade with merchants and dwarven smiths in cities, and hunt across open plains, amidst mountains and at sea.

·In a time of war, track down the child of prophecy, a living weapon of great power whose coming was foretold in ancient elven legends.

·Make choices that go beyond good and evil and face their far-reaching consequences.PLEASE NOTE: This IMPORT video game is REGION FREE and will play in all regions. However, Extra Content, DLC, and Online Services may not be compatible in your region without changing the location on your system.

See our Region Compatibility List for full details!PLEASE NOTE: This IMPORT video game is REGION FREE and will play in all regions. However, Extra Content, DLC, and Online Services may not be compatible in your region without changing the location on your system.