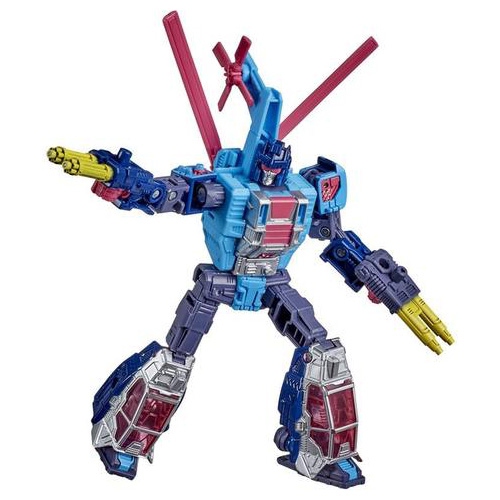 Description: Exclusive! Transformers Generations Selects bring back favorite characters from across the globe as exciting entrants into the Cybertronian Wars. Heroic robots join the battle with Transformers Generations Selects War for Cybertron Earthrise Deluxe Rotorstorm – Exclusive! This transforming figure is compatible with the C.O.M.B.A.T. system blast effects (included with Battle Masters figures, sold separately.) WFC-GS19 Rotorstorm transforms from helicopter to robot and back again. This special edition WFC-GS19 Rotorstorm figure is inspired by the Turbomaster figure originally released in 1992. It features deco and a head sculpt designed to resemble the look of the ruthless and fearless Autobot strategician from the IDW comic books. This is the first Rotorstorm figure released since 1992. Collect them all!

We receive both US and Canadian Cases. You will get either English, bilingual or trilingual carded figures based on availability. Please understand this before ordering.

Safety Warning: This product may contain sharp points, small parts that are choking hazards, and other elements that are not suitable for children under 3 years of age.

Recommended Ages
3 Years And Up

All refunds will be processed within 1 days