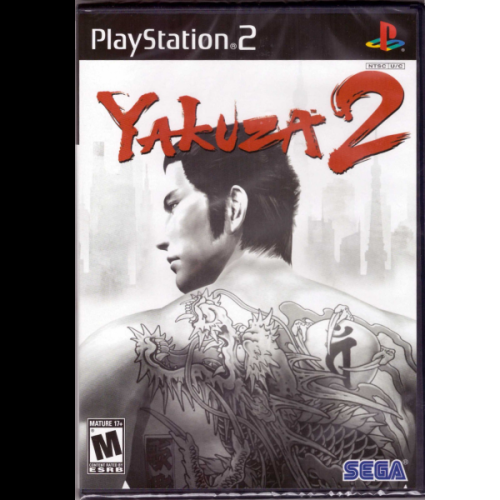 Yakuza 2 from SEGA for the Sony PS2 plunges you once more into the violent Japanese underworld.One year ago, Kazuma Kiryu left it all behind… Marking the anniversary of his split from Yakuza life, Kazuma and his adopted daughter, Haruka, visit the graves of his Yakuza family. When they get a surprise visit from Terada, the Chairman who took charge of Kazuma’s old Yakuza clan, Terada makes Kazuma an offer he cannot refuse…In intense brutal clashes with rival gangs, the police, and the Korean mafia, you will have even more opportunities to dole out punishment with an improved fighting engine. As the heroic Kazuma Kiryu from the original Yakuza, explore Tokyo and now Osaka.Features:

·Twice as much to explore. There is now more to see and do than ever before in the hugely expanded world of the Yakuza. Visit bowling alleys and driving ranges, as well as cabarets and bars, all licensed from actual Japanese establishments.

·Like the real Yakuza, you must ingrain yourself in the authentic, neon-lit adult playgrounds of Tokyo and Osaka and become a regular at nightclubs, hostess clubs, restaurants and stores to gain access to secret services and uncover tips.