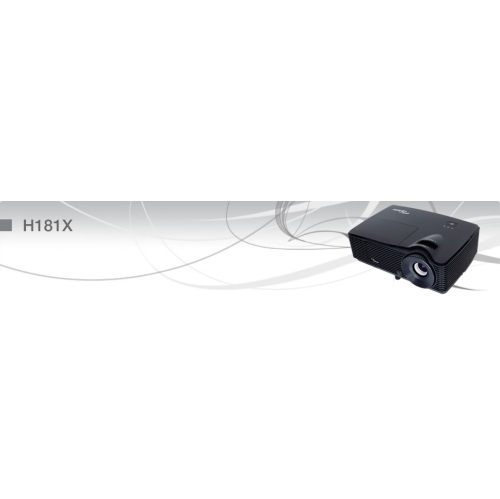 The 3200 lumen H181X 720p DLP Home Theater Projector from Optoma features two HDMI ports that support HDMI 1.4a for use with a wide range of devices,including Blu-ray players, cable boxes, game consoles, computers, and more. Full HDMI 1.4a 3D compliance means you can even use it to enjoy 3D movies andplay many 3D video games (glasses available separately). A single 0.65\ DLP imaging device renders a native resolution of 720p, plus the projector cansupport a range on non-native resolutions from SD (480i) up to Full HD (1080p) - as well as many computer formats - thanks to internal scaling.So that you can pass audio de-embedded from the HDMI signal to a receiver, amplified speakers, or other sound system there is a VAO stereo audio output ona 3.5mm mini connector. Additionally, a 2-watt speaker is built-in for those times when no external audio is available. To operate the projector locally,an IR remote control is included. In addition, there is an RS-232 serial port that allows you to integrate it with an automation system such as Crestron.Single-Chip DLP Technology

Uses a combination of a 0.65\ chip covered in millions of micro-mirrors and a color wheel to produce an image. DLP features less spacing betweenpixels and better contrast than many comparable LCD-based systems, and the design does not require a filter that needs to be replaced

Throw ratio is one of the most important specifications a projector has as it tells you the image size (width) you will get at a given distancefrom the screen. For example, at the 1.10x zoom setting and an 11\ 3\ distance from the screen, this projector will throw a 100\-diagonal(87\-wide) image. The projector will support screen sizes up to 300\ diagonal

A single lamp provides 3200 lumens of brightness in Normal mode, and is estimated to last 5000 hours (up to 6500 hours if constantly used in thelower brightness Eco Mode). To determine the ideal brightness level for your application, you will need to take into account the screen width,distance from the projector to the screen (throw distance), amount of ambient light near the screen, and the reflectivity (gain) of the screensurface used

This projector features a 16:9 native aspect ratio, the standard for HDTVs. In addition, the projector can show 4:3 content, either by adding blackbars (pillaring), stretching the image to fit, or cropping the image

With HDMI 1.4a mandatory 3D compliance, the H181X can display 3D images from a variety of sources, including many Blu-ray discs and video games.DLP-Link-compatible active 3D glasses (such as Optoma\s ZD302) are required - available separately