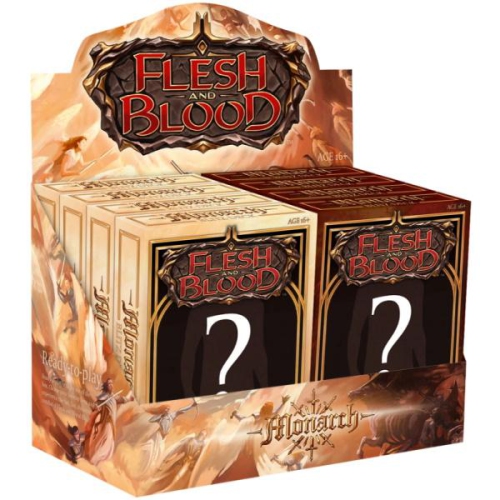 Equip your hero, and prepare to fight with the Flesh and Blood TCG: Monarch Booster Box!

Welcome to the world of Flesh and Blood, a hero-centric fantasy trading card game that features classic fantasy classes with unique playstyles.

Darkness, the canvas of the universe. Light, the brushstroke of creation. A forbidden power hungers to eclipse existence, wiping the canvas clean. The soul of Rathe stands resolute, a ray of hope to the artisans of civilization.

Monarch, the Fourth set in the Flesh and Blood card game, is a standalone booster set introducing four new heroes with all new mechanics across sealed deck, booster draft, and constructed formats.

Begin your journey as one of eight heroes:

In the depths of the Savage Lands, a lone brute has carved out his territory in blood and bone. Abandoned to the mercy of the jungle as a cub, he fought to survive, fending off vicious beasts and scavengers. Yet this struggle has forged an alpha predator, relentless and unflinching, tearing through anything that gets in his way.

Reckless, savage and uncontrollable, Rhinar is driven by his bloodlust and base instincts. When he fights, he enters a bloody frenzy. Everything around him becomes a threat, the ground turning slick with blood as he blindly butchers everything in his path.

The star of the Everfest Carnival, leader of the Legendarium, performing stories and legends for cheering crowds. Bravo grew up listening to the tales of old, fascinated by past heroes and adventurers. When his destiny came knocking, with a curious quest and mysterious companions, Bravo jumped at the chance to become a true hero. Now, he has embraced the legend of the Guardians, and is ready to write his own story.

Confident, charming and theatrical, Bravo treats battle like a performance. Set the stage, build the anticipation, and prepare for the grand finale, for once he’s ready to strike, nothing can stand in the way of his powerful attacks.

The head of the Mugenshi clan, Katsu belongs to one of the hidden households of Misteria, concealed within the Gorge of a Thousand Winds. Undergoing the traditional journey of the Jokyoku, he successfully regained his memories and returned to the clan, earning his place as head of the clan. Years later, he has left the gorge once more, determined to find a cure for the curse affecting his people.

Calm and level-headed, some might underestimate Katsu, mistaking his practical nature for an aversion to violence. However, underneath his peaceful demeanour is a sharp intelligence, capable of becoming a deadly force of nature when provoked. In the heat of battle, Katsu can call upon the power of the wind, striking down his opponents with the speed of a hurricane.

A young lieutenant in the Hand of Sol, Dorinthea Ironsong has dedicated her life to defending the people of Solana. Once, her kind heart and natural curiosity lead her to question her elders, forgoing the orders of her superiors in favour of following her heart. Yet her brash actions put the party in danger, and her fellow knights paid for her mistake with their lives. Thea has since learned to follow the wisdom of Sol in all aspects of her life, vowing to honour the memory of those that were lost that fateful day.

Thea is a formidable opponent on the battlefield, a prodigy swordswoman who uses both skill and strategy to her advantage. Wielding the Dawnblade, she is graceful and nimble, darting past her opponent’s defenses to make every attack count.

Descended from nobility, Kano was born with the power of the dragon’s fire within his veins, able to shape the flames from the instant he drew his first breath. A cunning trickster yet undeniably gifted with a connection to aether, he is both admired and scorned by the other Lord Wizards of the Court.

As a member of the royal court, Kano must inevitably take on his duty, and accept his place amongst the Dracai. But Kano, he'd rather focus on exploring age-old tomes in the deepest recess of the libraries, or hidden within ancient catacombs, for spells and tricks to control and amplify his flame.

A young mechanologist from the city's elite caste, Dash is a brilliant inventor full of wild ideas and the spark of genius. Born into the city of tomorrow to scientists of Teklo Industries, she grew up surrounded by some of the greatest minds in all of Rathe. And as she explored the world around her, she fell in love with the city, all the goods and bads that lay within.

Stubborn and rebellious, Dash's energetic nature often gets her into trouble. Once she has an idea, it's nigh impossible to dissuade her. And even though the Teklo name has allowed her to follow her whims, she despises the rigid dullness of Metrix's upper class, and would do anything to avoid becoming just like them.

Azalea - Ace in the Hole

Azalea is an obsessive, self-serving contract killer from the depths of the Pits. Working out of the Blackjack Tavern, she carefully selects each contract, going to great lengths to coordinate a flawless execution. Azalea has carved out a reputation for herself as one of the best contract killers, determined to stay one step ahead of the competition.

A life on the streets has made Azalea cynical and restless. In the Pits, anarchy reigns supreme, and a single mistake can mean the difference between life and death. Even though she has come a long way, Azalea has yet to realise that she is just one small cog in the giant, decrepit machine of the Pits...

Viserai is the first of his kind; an Arknight, gifted with both arcane power and physical prowess. Forced to serve the will of the master, he has long since forgotten his past, and the person that he once was. Wielding blade and aether alike, he is the perfect weapon.

As his creator searches for a way to bind Viserai to his will, the secrets of the Demonastery threaten to spill forth, as the ancient powers within stir once more. Viserai must find a way to break free before it is too late...

Embody order and wisdom as an arbiter of Light, or embrace the Shadows in your pursuit of power!

Card & Accessory Type
Other Accessories
Card Game
Other Trading Card Games
Rarity Level
Uncommon
Shipping Charges
Free standard shipping may be available on orders over a minimum amount (before taxes, fees, and promo codes). Shipping charges may vary based on item size and your shipping address. Want a shipping charge estimate? Simply add an item to your cart, then access the cart and enter your postal code in the shipping estimate section.
Processing Time
Most items ship within 2 business days after an order is placed*. Allow additional time for shipping to your address.
*Please note: If an item you ordered becomes unavailable, you'll be notified and a full refund will be processed within 2 business days.
Shipping Area Restrictions
Shipping is not available in the following areas*:
*Please note: Shipping area restrictions may vary for large items. If an item can't be shipped to your address, we'll let you know during the checkout process.