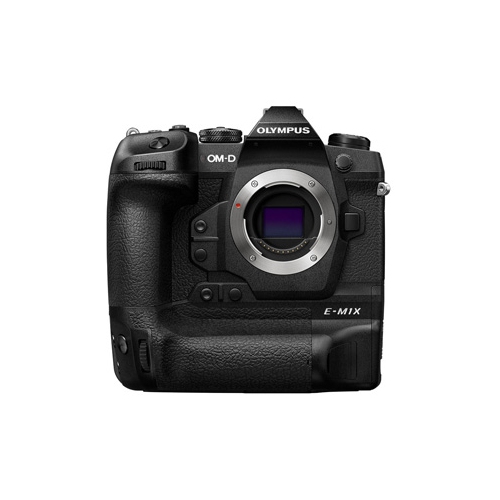 ·Rechargeable Battery BLH-1 (2) DESCRIPTIONFocused on reliability, speed, and versatility, the Olympus OM-D E-M1X is a Micro Four Thirds mirrorless camera offering a broad range of photo and video capabilities to satisfy the professional shooter's needs. Featuring a high-resolution 20.4MP Live MOS sensor and dual TruePic VIII image processors, the E-M1X is characterized by its quick continuous shooting, up to 60 fps with an electronic shutter and 15 fps with a mechanical shutter, as well as DCI and UHD 4K video recording. The sensor and processors also offer a sensitivity range up to ISO 25600 while a sophisticated 5-axis sensor-shift image stabilization system compensates for up to 7.5 stops of camera shake for sharper handheld shooting. Beyond just imaging, the sensor's design also incorporates 121 on-chip phase-detection points, all of which are cross-type, along with 121 contrast-detection areas for fast and precise focusing and subject tracking performance.Distinguishing itself further, the E-M1X is also the first Micro Four Thirds camera to feature an integrated vertical grip for improved ergonomics and handling regardless of shooting in horizontal or vertical orientation. This grip also allows for two batteries to be used at a time, for longer shooting sessions. The durable magnesium-alloy body is further characterized by its extensive weather-sealing to support working in harsh climates, and both a 2.36m-dot, 0.83x-magnification electronic viewfinder and 3.0" 1.037m-dot vari-angle LCD touchscreen are featured, too, for intuitive control and working from a variety of angles. Additionally, built-in Wi-Fi and Bluetooth further expand sharing and remote shooting capabilities, and dual SD card slots and a USB 3.0 Type-C port expand file saving and tethered shooting capabilities.20.4MP Live MOS Sensor and Dual TruePic VIII Image Processors

A high-resolution 20.4MP Live MOS sensor and dual TruePic VIII image processors work in concert to provide notably fast shooting performance, expanded sensitivity range up to ISO 25600, and versatile 4K video recording capabilities. Ideal for sports and wildlife shooting, the sensor and processor combination avails a full-resolution continuous shooting rate of 15 fps for up to 103 consecutive raw files when working with the mechanical shutter. When shooting with the silent electronic shutter, this shooting rate can be boosted up to 60 fps with single-shot AF for up to 49 consecutive raw frames or 18 fps shooting with continuous AF for up to 74 consecutive raw frames.DCI and UHD 4K Video Recording and OM-Log

The sensor and processor also support recording both DCI (4096 x 2160) and UHD (3840 x 2160) 4K movies. When working in DCI, a true 24.00 fps frame rate is used, along with IPB compression and a 237 Mb/s bit-rate, and UHD 4K is available in frame rates up to 30p and a 102 Mb/s bit-rate. Full HD 1080p and HD 720p recording is also supported. Audio recording is possible using the built-in stereo microphone, and both an external mic jack and headphone jack are available for improved audio recording and monitoring.Benefitting recording in varying light conditions, an integrated OM-Log setting can be used to extend the effective dynamic range and afford a greater range of control during post-production colour grading when used with the accompanying LUT file. Use of an external recording monitor is also possible, via HDMI output, which supports 4:2:2 colour for a greater colour correction range.Additionally, a Time-lapse Movie mode is also available for recording up to 4K UHD resolution with a 5 fps shooting rate to highlight subject changes or movement over a longer period of time. Full HD and HD time-lapse settings are available, too, as well as a high-speed Full HD setting with 120 fps frame rate.121-Point All Cross-Type Phase-Detection AF

An advanced autofocus system combines both 121 on-chip phase-detection points and 121 contrast detection areas for focusing performance that is both quick and accurate. All 121 phase-detection points are cross-type, too, for improved precision in mixed lighting conditions, as well as enhanced subject tracking capabilities. Different focusing modes are available to suit working in various shooting conditions, including 121-point, for general use; Group 25-point, for moving subjects, such as birds and wildlife, and when 121-point is too wide; Group 9-Point, for smaller and more distant subjects; Group 5-Point, for when 9-point is too wide or to suit working with nearer moving subjects; Single, for working with still or small subjects that are not moving; and Small AF, for working with close-up subjects. Custom AF targets can also be set, for working with specific numbers of focus points within the 121-point grid, and an AF limiter function allows you to constrain the focusing distance within a specified range for more responsive performance. Additionally, continuous autofocus sensitivity can be set, to benefit its use while recording video, within five levels for more pleasing focus movements.Complementing the control over autofocus, focusing speed and tracking is further benefitted by Intelligent Subject Detection AF; an algorithm that uses deep learning technology to automatically detect specific subjects, focus on them, and track them. This system has specifically been developed for photographing cars, motorcycles, airplanes, helicopters, trains, and locomotives. For photographing people, Face Priority and Eye Priority AF is also available to prioritize the face and eyes of your subject. And for working in low-light conditions, focusing sensitivity is available down to -6 EV.Benefitting focus operation, dual AF multi selectors are featured on the camera for easy access in either the horizontal or vertical orientation and AF area/target settings can also be customized for shooting in either orientation. Converse to autofocus capabilities, manual focus users are also benefited by live view magnification and focus peaking controls for greater accuracy.5-Axis Sensor-Shift Image Stabilization

In-body, sensor-shift image stabilization helps to minimize the appearance of camera shake by up to 7 stops with any lens in use and compensates for camera movements that become especially noticeable when working with telephoto shots, macro imagery, and long exposures. Furthermore, this unique image stabilization system works across five axes to compensate for vertical angle rotation, horizontal angle rotation, horizontal shift, vertical shift, and rolling camera shake movement. This range of detected movements serves to benefit traditional still image shooting as well as movie recording and working with moving subjects more effectively. Additionally, when paired with select lenses featuring optical image stabilization, shake compensation up to 7.5 stops is possible.Body Design

·High-resolution 2.36m-dot electronic viewfinder is available for eye-level monitoring, and it offers an impressive 0.83x maximum magnification for clear, distortion-free viewing. The finder's design uses a four-element optical system, which includes aspherical and high refractive index elements, for high clarity and it also has a maximum frame rate of 120 fps and lag time of 0.005 sec for fluid and accurate movement rendering.

·Rear 3.0" 1.037m-dot LCD monitor features a vari-angle design to support working from a variety of angles, and it is also a touchscreen for intuitive menu navigation and image playback. Additionally, an LV Boost mode can be used to optimize the screen's brightness and prioritize the frame rate when working in dark locations.

·Integrated vertical grip offers a more ergonomic and secure design for holding the camera in either the horizontal or vertical shooting orientation. This design also affords more room for incorporating two sets of physical controls, shutter releases, and permits working with two batteries.

·The USB Type-C port can be used for qui

Seller offers free standard shipping on all orders above $99 for Ground Regular Shipments to all areas except for rural areas.