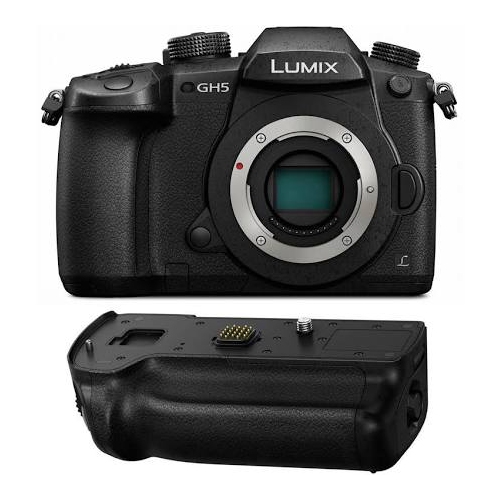 Upgraded, redesigned, and filled with features, the Lumix DC-GH5 Mirrorless Micro Four Thirds Digital Camera from Panasonic provides an outstanding imaging platform for shooters who demand some of the best video and still photography quality they can get in a single compact camera. At the heart of the camera is a 20.3MP Digital Live MOS sensor and a newly developed Venus Engine processor, which both offer dramatically improved processing times over its predecessor. This enables the ability to record 4K video at up to 60 fps, 10-bit 4:2:2 internal recording with select settings, Full HD video at up to 180 fps, 12 fps continuous shooting, and sensitivities up to ISO 25600. Also, the camera features built-in 5-axis sensor stabilization, which can work with certain lenses to activate Dual I.S. 2 for highly effective shake correction that can compensate for up to 5 stops of shutter speed. Other improvements include a speedier and more accurate Advanced DFD autofocus system that can lock on in just 0.05 seconds, as well as 6K PHOTO at 30 fps and 4K PHOTO at up to 60 fps.Along with all these internal improvements, the body received some significant upgrades as well. For viewing and composing images both the 0.76x OLED viewfinder and 3.2 free-angle touchscreen received resolution bumps to 3.68m dots and 1.62 m dots, respectively. This will make shooting more comfortable and more accurate. The magnesium alloy body is now freezeproof to 14°F in addition to splash and dustproof. For fast image transfer and saving, there are now two UHS-II SD card slots. Additionally, for a completely wireless setup it offers both Wi-Fi and Bluetooth for advanced functionality when paired with a mobile app.20.3MP Digital Live MOS Sensor and Venus Engine

Burst: Just as with video recording, this mode will allow you to continuously record for up to 29 min. 59 sec., making it ideal for instances where you need a fast frame rate in order to capture the best moment.

For accelerated autofocus performance, and Advanced DFD (Depth-From-Defocus) technology is employed to quickly calculate the distance to subjects and adjust the focusing position in as little as 0.05 seconds, which enables continuous shooting up to 9 fps with continuous AF. This contrast-detection type focus method benefits both still and video recording modes, as well as subject tracking applications where subject color, size, and motion vectors are used to intelligently lock-onto the moving subjects and ensure precise focus. The sensitivity and speed can be adjusted to further improve performance with certain subjects. It also features 225 AF areas which provide excellent control over where the camera will focus. Additionally, supporting working in low-light conditions, a Starlight AF feature enables accurate AF performance down to -4 EV.

Benefitting manual focus operation, focus peaking is available that highlights bright edges of contrast with a colored outline for quickly recognizing your focus point, as well as Touch MF Assist for touch-to-focus o