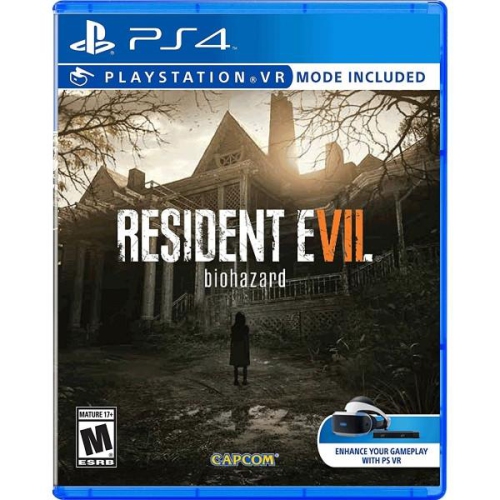 Resident Evil 7: Biohazard from Capcom for the Sony PS4 sets a new course for the Resident Evil series as it leverages its roots and opens the door to a truly terrifying horror experience.A dramatic new shift for the series to first person view in a photorealistic style powered by Capcom’s new RE Engine, Resident Evil 7 delivers an unprecedented level of immersion that brings the thrilling horror up close and personal.

Set within a sinister plantation mansion in modern day rural America and taking place after the dramatic events of Resident Evil 6, players experience the terror directly from the first person perspective for the first time in the Resident Evil series.When Ethan Winters opened his inbox, the last thing he expected was to find an email from his wife; she had been missing for three years. The message was simple: "Come get me," and an address in Louisiana.This leads Ethan to a decrepit mansion in the heart of the bayou. The place has a seriously creepy vibe, but Ethan continues his search – until a stranger attacks him and knocks him unconscious.Ethan has no idea what awaits him when he wakes up... for he is now in the clutches of the Baker family.

Embodying the iconic gameplay elements of exploration and tense atmosphere that first coined “survival horror” some twenty years ago, Resident Evil 7 biohazard delivers a disturbingly realistic experience that will define the next era in horror entertainment! Features:

· Opening the doors to a new era of horror - The next major entry in the renowned Resident Evil series makes a dramatic new shift as it comes to next generation consoles.

·Returning to the series’ roots - Resident Evil 7 biohazard will deliver an experience reminiscent of the series’ signature gameplay including exploration, puzzles and a realistic tense atmosphere for players to encounter but will offer a complete refresh of the gameplay systems to propel the survival horror experience to the next level.

·Immersive, visceral horror - A new shift for the series to first person view brings the terrifying horror directly up close and personal; PSVR compatibility heightens the chilling experience even more.

·Built from the ground up on the RE Engine - Capcom’s brand new VR compatible development engine works in tandem with industry leading audio and visual technologies to create a disturbingly photorealistic experience for an unprecedented level of immersion.