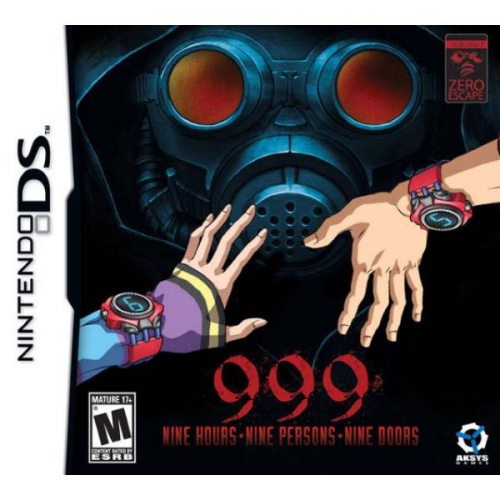 Nine Hours, Nine Persons, Nine Doors (999) from Aksys Games for the Nintendo DS and DSi refers to the frightening predicament protagonist Junpei finds himself in: he's trapped in a sinking ship with eight other passengers, he has only nine hours to live, and there are nine locked doors leading to his freedom.Junpei, a fairly normal college student, finds himself involved in a deadly conspiracy that he couldn't have possibly imagined... He awakes aboard an old passenger ferry, dazed and confused he stumbles around the room trying to reclaim his memories.The first thing he noticed was a number roughly drawn on the cabin's door. A bright red number 5. Junpei's memory then returned and he remembered what happened right before becoming unconscious! A mysterious person with a gas mask crossed his mind.He remembered the haunting words he spoke, I'm gonna make you play the game, the 'Nonary Game' the game of life or death".Features:

·Interact with eight quirky characters to learn more about their backgrounds

·Billed by the publisher as a "horror visual novel"