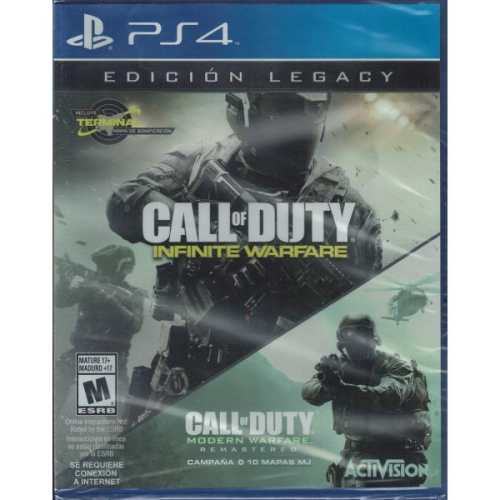 The Call of Duty: Infinite Warfare - Legacy Edition from Activision for the Sony PS4 will lead players through an unforgettable journey as they engage in heroic battles with hallmark boots-on-the-ground combat. This Legacy Edition also includes Call of Duty: Modern Warfare Remastered.

This Region Free Spanish import plays in full English - or whatever language your system is currently set to!

The campaign spans our solar system, taking players on a journey from Earth to beyond our atmosphere. It’s grand scale war with unforgettable characters, rich emotional arcs, an epic new setting and blockbuster Call of Duty action.

After a devastating attack on earth, as Captain Reyes, a Tier 1 Special Operations pilot, you must lead the remaining coalition forces against a relentless enemy, while trying to overcome the deadly, extreme environments of space.

After a surprise attack on the headquarters of UNSA, Lt. Nick Reyes must take the helm of the Retribution, one of Earth’s last remaining warships. In a time of unthinkable adversity, he must lead the remnants of coalition forces against the relentless Settlement Defense Front.

As space colonization grew, the nations of the world formed the United Nation Space Alliance (UNSA), to govern space travel, commerce and trade. The Solar Alliance Treaty Organization (SATO) is the peace-keeping body of the UNSA.

Comprised of a splinter group of insurgents that broke away from UNSA during a war of secession, years ago, the Settlement Defense Front (The Front, SetDef) is a fascist power. They're brutal and militant radicals, toughened by extreme off-world environments and conditions.

One of the most critically-acclaimed games in history, Call of Duty 4: Modern Warfare is back, remastered in true high-definition featuring improved textures, physically based rendering, high-dynamic range lighting and much more to bring a new generation experience to fans. Relive the iconic campaign as you are transported around the globe with Capt. Price, Gaz and Soap across fan favorite missions, including “All Ghillied Up,” “Mile High Club,” and “Crew Expendable.”

·Multiplayer: In Call of Duty Infinity Warfare, the handling system has evolved to give a better focus on battles. The maps are designed to offer a fast, entertaining and frantic gameplay.

·Zombies: A new original Zombies mode comes to Infinite Warfare that will take you to a wild adventure through a new story with unique features. Wait for a really fun Zombie mode that will surprise most.

Of the 3022 reviewers who responded, 2689 would recommend this product.