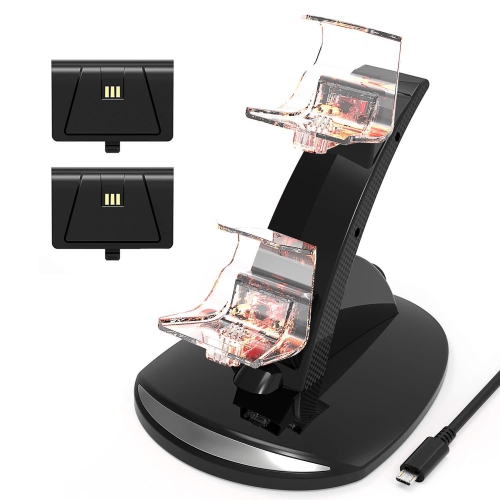 ·[XBOX ONE CONTROLLER CHARGER] Say goodbye to AA batteries! With Xbox One controller charger you will no longer need to keep buying AA batteries for your controller,Charge 2 Xbox wireless controllers simultaneously and twice as fast

·[LED Indicator Light] Built in LED indicator for charging status,Red, Charging, Yellow, Charged, Compatible with both the Xbox One and Xbox One S/Xbox X Controllers

Charge Multiple Xbox One Controllers at Once

With a full charge, up to 20-28 hours of play time is achieved on the 1200mAh NiMH battery packs. They are built to last, with a lifespan of over 1,000 charge cycles.

When not gaming, simply put the equipped Xbox One Controller on the Charging Station and it will start charging automatically without the need to remove the battery. This is a quick and easy process to charge each controller

The helpful LED indicator will Red when a controller is being charged, and stays Yellow/Orange when the charging is complete.

Simple and easy to charge with the charging station

Compatible with both the Xbox One and Xbox One S controllers.

What is in the package