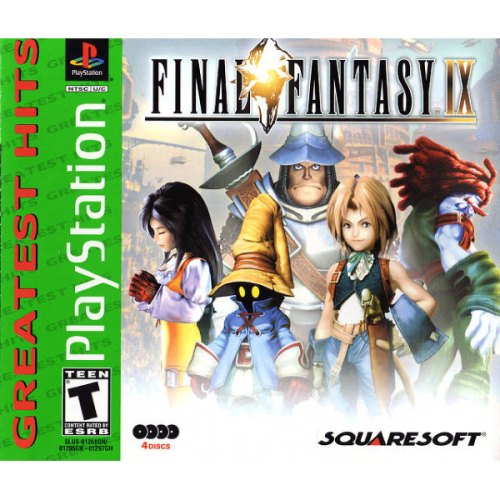 Final Fantasy 9, the third incarnation of Square Enix's acclaimed RPG series on the Sony PS1, follows the story of an impetuous thief, a mysterious mage, a lonely princess, and a dedicated knight.All are united in their desire to save the kingdom of Alexandria from a queen gone mad. Eight characters are playable in total, with heroes leaving and rejoining your party at certain points in the narrative as they complete specific tasks.Whenever characters leave the party, you will be updated on their progress with the "active time event" system. An icon at the bottom of the screen will flash when something significant happens outside your party. Selecting an event pauses the current action and displays dialogue sequences or cut-scenes. Although these story segments are optional, viewing them can reveal new character developments. Final Fantasy 9 retains many features from the two previous PlayStation games in the series, including pre-rendered backgrounds, polygonal characters, random battle sequences, and summon attacks. Yet instead of guiding three people in combat, you can battle with up to four. An "active time battle" gauge indicates when a character can attack, while the "trance" gauge builds as characters receive damage. Once this meter is filled, powerful special moves become available.Features:

·Dark times have spread over the world of Gaia.

·Four separate governing nations, some blinded by their short-sighted greed.

·Some persevering in the name of justice, are battling on and off in a deadly game for power.

·One kingdom, that of Lindblum, headed by the honorable and trustworthy Regent Cid, finally decides to take a stand against the unspeakable massacres by the troops of Alexandria.Click here to see the ENTIRE Final Fantasy collection!