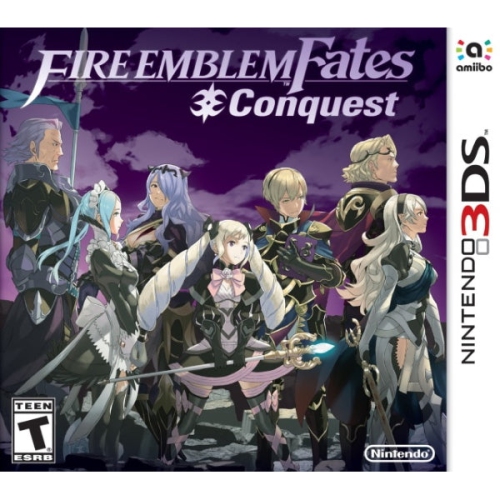 An army of knights, mages, archers and more are at your command in the most tactical battles in series history with Fire Emblem Fates: Conquest for the Nintendo 3DS.For the first time in the series, players take on the role of the main character and command an army, while struggling to decide which path to follow: helping blood relatives or the family that raised him or her.Features:

·For the first time in the Fire Emblem series, your customized avatar is the main character (Prince or Princess of Hoshido Kingdom).

·Epic storyline centered on your avatar, forced to choose between bloodline and family who raised you.

·New “My Castle” area to interact with your allies and build stronger relationships.

·Have StreetPass encounters with other players to visit their My Castle.

·Tap in corresponding Fire Emblem amiibo figures and Marth, Ike, Lucina, and Robin will appear in your game, ready for you to battle and recruit.