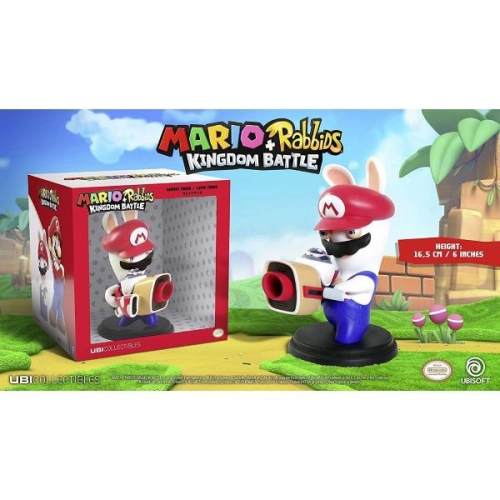 Mario + Rabbids Kingdom Battle is the story of an unexpected encounter between Mario and the irreverent Rabbids. To bring order back to a splintered Mushroom Kingdom, Mario, Luigi, Princess Peach, and Yoshi team up with Rabbids heroes in a journey through four different worlds.Inspired by the mischievous characters in Mario + Rabbids Kingdom Battle, the video game, Rabbid Mario is one of four premium figurines in a collection created by Ubicollectibles.Rabbid Mario is ready for battle with his mustache, Mushroom Marauder gun, and a massive case of imposter syndrome.Game not included!Features:

·Equipped with the Mushroom Marauder gun.

4.9
Average rating based on 27 reviews

Of the 27 reviewers who responded, 27 would recommend this product.