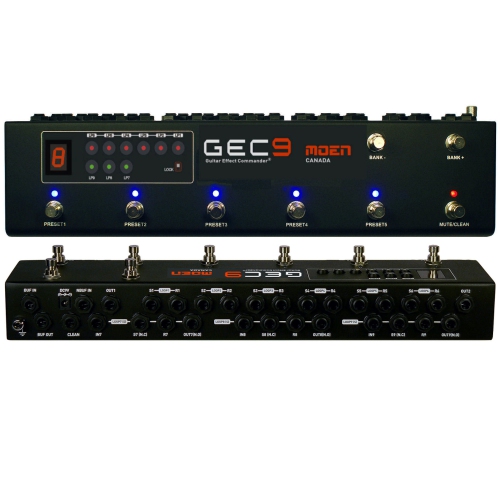 The MOEN CANADA GEC9 V2 is an updated version of the popular MOEN GEC9 - one of the worlds most versatile effects routing system where multiple combination effect send and return loops can be set-up and engaged by a single switch.

Program Lock switch that prevents the preset from being changed unexpectedly, a TRS audio jack that allows you to connect the amplifier's footswitch to a stereo cable, and 3 options for double pressing a preset.

GEC9 features an ultra compact enclosure, to endure heavy foot stomping, and is built to last for generations to come.

Recall up to 50 presets instantly and silently. Thanks to the intelligent pop-cancellation circuitry, GEC9 eliminates the annoying "pop" sound whenever switching from different presets.

Seize control of your guitar sound and stage performance by arranging your effect pedal signal loops with room for up to 50 presets. With the MOEN GEC9, you are always in the drivers seat!

The separate loops can be used as latched switches for AMP channel switching, switching AMP channel by one preset!

Each separate loop can be used as programmable ABY switcher.

There are two output jacks which are able to output to two AMPs at the same time.

Instant MUTE design. The MUTE is also a "Switch to TUNER" switch.