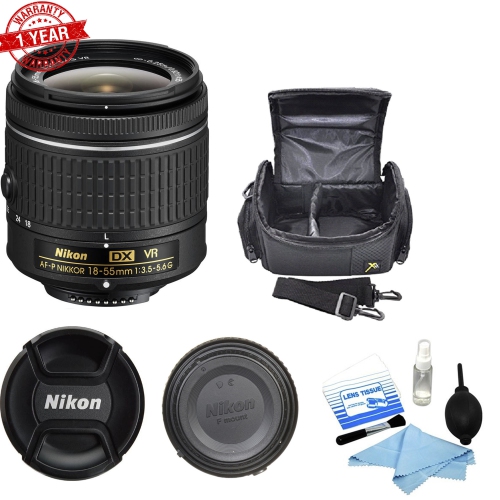 Updating the staple DX-format mid-range zoom is the AF-P DX NIKKOR 18-55mm f/3.5-5.6G VR Lens from Nikon. Offering a 27-82.5mm equivalent focal length range as well as a compact form factor, many shooters will find this to a be a versatile and lightweight option for their bag. It uses a variable f/3.5-5.6 aperture to keep size down and incorporates two aspherical elements to limit distortion and combat aberrations. Also, the Super Integrated Coating will combat flare and ghosting.The AF-P system brings with it a pulse stepping motor AF system that is fast and quiet, making it ideal for stills and video alike. This model also offers Nikons Vibration Reduction image stabilization which can compensate for about 4 stops of shutter speed to limit the effects of camera shake. It even removes switches from the lens barrel, preventing accidental changes and enabling users to quickly adjust settings from the cameras menu. Additionally, a rounded 7-blade diaphragm creates smooth bokeh.DX-format mid-range zoom offers equivalent focal length range of 27-82.5mm.

Super Integrated Coating reduces the impact of flare and ghosting in your images.

Two aspherical elements help to minimize distortions throughout the zoom range in order to maintain edge-to-edge sharpness and illumination.

A pulse stepping motor AF system enables accurate and silent focusing that works well in both stills and video shooting.

Nikons Vibration Reduction image stabilization is rated to compensate for up to 4 stops of shutter speed to reduce the effects of camera shake.