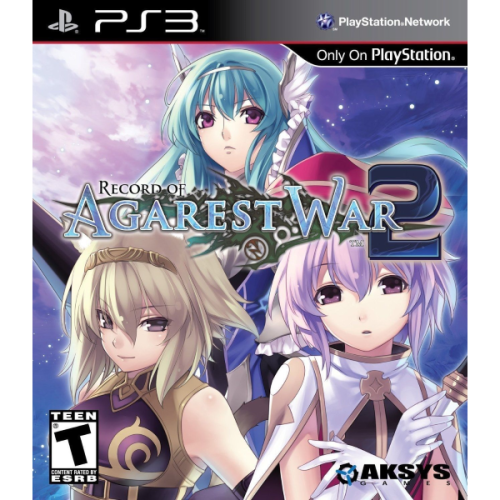 Record of Agarest War 2 from Aksys Games for the Sony PS3 features all new strategy RPG gameplay, HD graphics and bonus mini games.One day, the world was enveloped by a mysterious blinding light. The destruction it caused was terrible, even as the light itself was sublime in its beauty, and it made those who witnessed the awesome display think of the unrestrained rage and fury of the divine.The central continent, from where the light is believed to have originated from, went silent, while at the same time demons began to spread throughout the world like a plague. Amongst the survivors of the catastrophe, that fateful day became known as the “Day of Light.”Sometime after the events of the Day of Light, a young man by the name of Weiss, who had lost all memory of himself, encounters an enigmatic woman named Eva, who introduces herself as an Agent of the Divine. It is from her that Weiss learns that he has committed the grievous sin of deicide, and that in order for him to atone for his crime he is to become the “Vessel” in which the power of the divinity he had slaughtered will be stored. For it will be that power that will be used to resurrect the one whose life he stole.For those who betray the divine will pay for their sins in the space which separates salvation and damnation, as will their progeny…Features:

·Revamped Battle System: Unlike the first two games of the series, Agarest 2 battles are fought with an engaging active grid-based battle system.

Genre
RPG & Strategy
Shipping Charges
Free standard shipping may be available on orders over a minimum amount (before taxes, fees, and promo codes). Shipping charges may vary based on item size and your shipping address. Want a shipping charge estimate? Simply add an item to your cart, then access the cart and enter your postal code in the shipping estimate section.
Processing Time
Most items ship within 2 business days after an order is placed*. Allow additional time for shipping to your address.
*Please note: If an item you ordered becomes unavailable, you'll be notified and a full refund will be processed within 2 business days.
Shipping Area Restrictions
Shipping is not available in the following areas*:
*Please note: Shipping area restrictions may vary for large items. If an item can't be shipped to your address, we'll let you know during the checkout process.
See our return policy to find specific return information for this product and steps on how to return by mail.